Iʻm being a bit lazy here, not just going and looking, but...
Has anybody with an RL mounted a shunt in the battery compartment? If so, any useful info about mounting position and how long a negative lead Iʻll need - and what gauge? I ordered a Victron SmartShunt and Iʻm trying to plan ahead.
Peter Tourin
2020 Unity RL, ex 2012 Unity MB
D

If your battery compartment is under the step into the RV then there is plenty of space in the back of the compartment to mount the shunt.
2018 Unity TB

Yes, the batteries are under the step. Unlike my older MB, they slide out forward (towards the door). Iʻm hoping I can find an online source of welding cable with terminals for the wire from the battery to the shunt.
Peter Tourin
2020 Unity RL, ex 2012 Unity MB
M

Quality Copper Battery Cables Made in the USA! - BatteryCablesUSA

If you plan on replacing your inverter size your cable gauge to the new inverter.
For my Victron Multiplus 3K with its boost capability I used 4/0 cable.

I used a 1" x 1/8" aluminum bar, I had left over from other projects, to connect my shunt to my batteries. At the time I had FLAs but have since gone to AGMs and it transfered very easily to them. If I were going with more capacity Lithium, I would use at least a 1/4" thickness aluminum bar to make my connection bar. Many use copper bar stock for a connection bar, which I believe only needs to be half the thickness of aluminum. I bought the lug adapter for my battery post design from Amazon, https://www.amazon.com/Schumacher-BAF-MT1-Marine-Terminal-End/dp/B0060YHLJS/ref=sr_1_1?crid=20BF7S4N3K94L&dchild=1&keywords=battery+connectors&qid=1605016098&sprefix=Battery++conn,aps,235&sr=8-1, which offers lots of options for various designs. They are also readily available at any auto parts store. 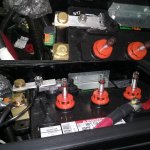 Thanks! - I hadnʻt thought of that and itʻs dirt simple - keeps me from having to do the extra wire, and Iʻll bet I have some pieces of copper sitting around the shop that can be cut down.
Peter Tourin
2020 Unity RL, ex 2012 Unity MB
R

I took a piece of copper pipe and mashed it in a vise to get it somewhat flat. Then I hammered it until it was flat. I think it was 3/4 inch pipe.

Great idea, and you can even keep folding it over on itself and hammer it flat until you get the thickness you want! You can get that at any Lowes/HD/hardware store.
SSTraveler
2014 Unity Murphy Bed/2014 MB Chassis
R

Here's a photo. The red stuff is NOCO NCP2 CB104S 4 Oz Oil-Based Battery Corrosion Preventative Brush-On I wrapped part of it with black electrical tape to reduce the possibility of shorting the bar.

I would highly recommend not using an aluminum bar but instead use copper bar from the battery terminal to the shunt. Aluminum corrodes easily and the 2 connections can become high resistance over time leading to excessive heat and possible fire danger. Not to mention the effects of vibration at the connection points. That’s why you don’t see aluminum wiring in houses any more. Copper is a much safer material and doesn’t cost that much more for safety.
2018 Unity TB

I'm confused about installing BMV-700. I have a a house battery in the engine compartment. I have two big positive wires running off it into the driver seat base: a 4 gauge wire to my fuse box, and a 4/0 welding cable that runs to my inverter, which is on the back of the driver seat. To reduce...
sprinter-source.com
--Pete
Formerly: 2005 Airstream Interstate (2500 T1N)
Now: 2014 Great West Vans Legend SE (3500 NCV3 I4)

The SmartShunt is in - up and running. Is there anything I need to know for SmartShunt/BMV712 setup for the 6 volt batteries that LTV is now using? I set the voltage to 13.2 but thatʻs the only parameter I changed. I need to sync - it came up reading 11.9 volts and 100% SOC, which isnʻt exactly on the money <g>... How do you sync? Do you do a full charge, disconnect and let the surface charge drop off and then sync when the batteries have dropped down to their resting voltage? I havenʻt done this in a while, donʻt remember when you want to sync.

If you go to the AMSOLAR site or search the internet there are Victron BMV 712 setting recommendations for FLA, AGM, and Lithium batteries. There are even manufacturer specific settings, ie Battleborn, which I imagine would be the same for the SmartShunt.
SSTraveler
2014 Unity Murphy Bed/2014 MB Chassis

Thanks for the suggestion about AM Solar - their values worked well. I watched the first charge carefully - saw the voltage climb over their 4.1v setpoint, watched the current drop to 2% ( I used 4 amps - Iʻm actually sure how the present LTV batteries are rated), and after a few minutes I saw the SmartShunt auto-sync. Very cool!

I have to say how nice it is to have a working monitor again!!! I like the SmartShunt. I had a BMV702 in my last rig, and watched on my iPhone much more than the display. The app is easier to use and I have my iPhone mounted to the left of the steering wheel so itʻs easy to watch. And being to really monitor what the batteries and charge systems are doing is so useful - the GoPower display is simply low-tech and doesnʻt provide much in the way of useful information. The SmartShunt is really worth the cost.
Peter Tourin
2020 Unity RL, ex 2012 Unity MB

Iʻm charging via the inverter/charger and I just notice what I think is a problem with setup parameters. I used the AM Solar parameters - Charged Voltage = 14.1, Tail Current = 2% (of 200 Ah), among other settings. The first time I finished charging was when I was driving - the voltage was up around 14.5 and when the charging current dropped below 4 amps for a few minutes, the SmartShunt did the auto-sync and went to 100%. Then I parked for several days and the SOC went down way below 50%. I then plugged into shore power and charging started, with an initial charge current of over 70 amps. After some hours I checked up on the charge and found that the voltage was up around 14.3 or more and the charge current was down to about 10 amps. So far so good. BUT - I just went out again and found that % SOC read around 96%, voltage was 13.26 and charge current was around 2 amps and dropping. So Iʻm wondering if the inverter/charger switched to float and dropped the voltage before the charge current got low enough to trigger the auto-sync. IIRC, thatʻs bad since now it wonʻt auto-sync. Has anyone else run into something like this? Am I missing something?
Last edited: Nov 17, 2020
Peter Tourin
2020 Unity RL, ex 2012 Unity MB

Itʻs now 90 minutes later and Iʻm confirming my last post. I just stepped out and found that the SOC still is reporting as 96%, the voltage is still at 13.26 and the current is reading 0.86A. So it appears that the battery is floating, that the inverter/charger wonʻt ever raise its charging voltage, and the SmartShunt will never auto-sync. Nasty! I suppose I could go back to setting the Charged Voltage at 13.2 - the batteries would reach that setpoint much earlier but thatʻd be OK - the auto-sync wouldnʻt happen till the tail current hits 4 amps and stays there for 3 minutes - thatʻd work.

Iʻll also bet that if I now go out and drive around, the Sterling DC-DC charger will take over and sooner or later itʻll raise the voltage to over 14v - and if it does that and holds it for 3 minutes, Iʻll auto-sync. But thatʻs not a sensible setting - then I might never auto-sync except when Iʻm driving.
Peter Tourin
2020 Unity RL, ex 2012 Unity MB
You must log in or register to reply here.
Top Bottom