My rails have been through one winter thus far with sustained temps in the low teens and have been snow and ice covered without issue. The panels have also been whacked by low hanging branches. I've lost an end cap but the bond seems intact.

I'm just about finished. The Marine 5200 takes a week to dry and I decided not to disturb it for best results. Here in Florida with our extreme humidity it probably dried faster. I decided to go the way Mitch originally did - rails plus VHB tape + 5200 + brackets. Only instead of steel L's I cut 24 2" X 2" L brackets from a 4 foot piece of stock aluminum at Lowes. When I got to the very last panel (behind the AC) the roof curvature was so pronounced that most of the rail would be 1/2" in the air, so I cut them in half and went back to Lowes for more aluminum stock.

On the photo attached I ran one panel "sideways" as I had a couple existing antennas on the far front starboard side. And I pulled the Winegard and donated it to somebody on Facebook.

5200 works nice like caulk and I really pride myself on long perfect caulk lines, but on the tiny brackets I just slopped it on as they are covered by the solar panels anyway. I ended up starting a second tube of 5200, so if I had known that in advance I probably would have cut one tube with a smaller nozzle for the little brackets. I think the most important part is working a generous amount to the front of the rail which is curved for extra adhesion.

Lastly I really hated the way LTV doused the 3-1 MC4 branch connectors in Dicor. With so much Dicor piled on you had to use a zip tie to release each cable and it was a real mess. So I pulled every single LTV cable off the roof and filled a dozen holes. Then I purchased new Renogy 3-1 branch connectors (for 3 sets of 2 panels wired in series). I'm going to zip tie mine down with the hold downs that Mitch used which have a clean look and are easily cut and reused if maintenance is needed. Finally laying the panels today.

My impression is that the Xr100 rails are a whole lot of work compared to just using simple brackets and tape like most people. If I end up replacing or upgrading panels in the future it will be worth all the extra effort. 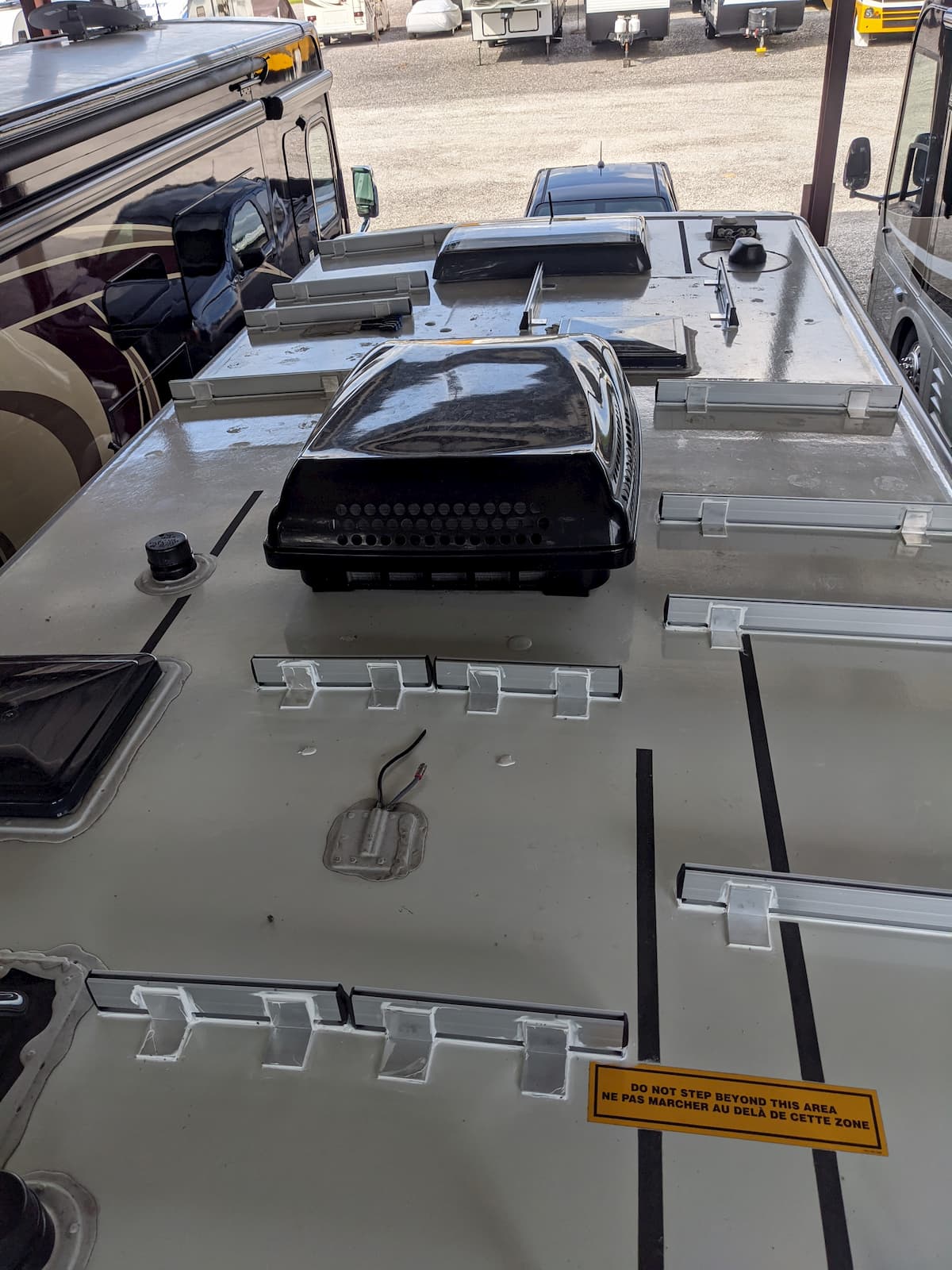 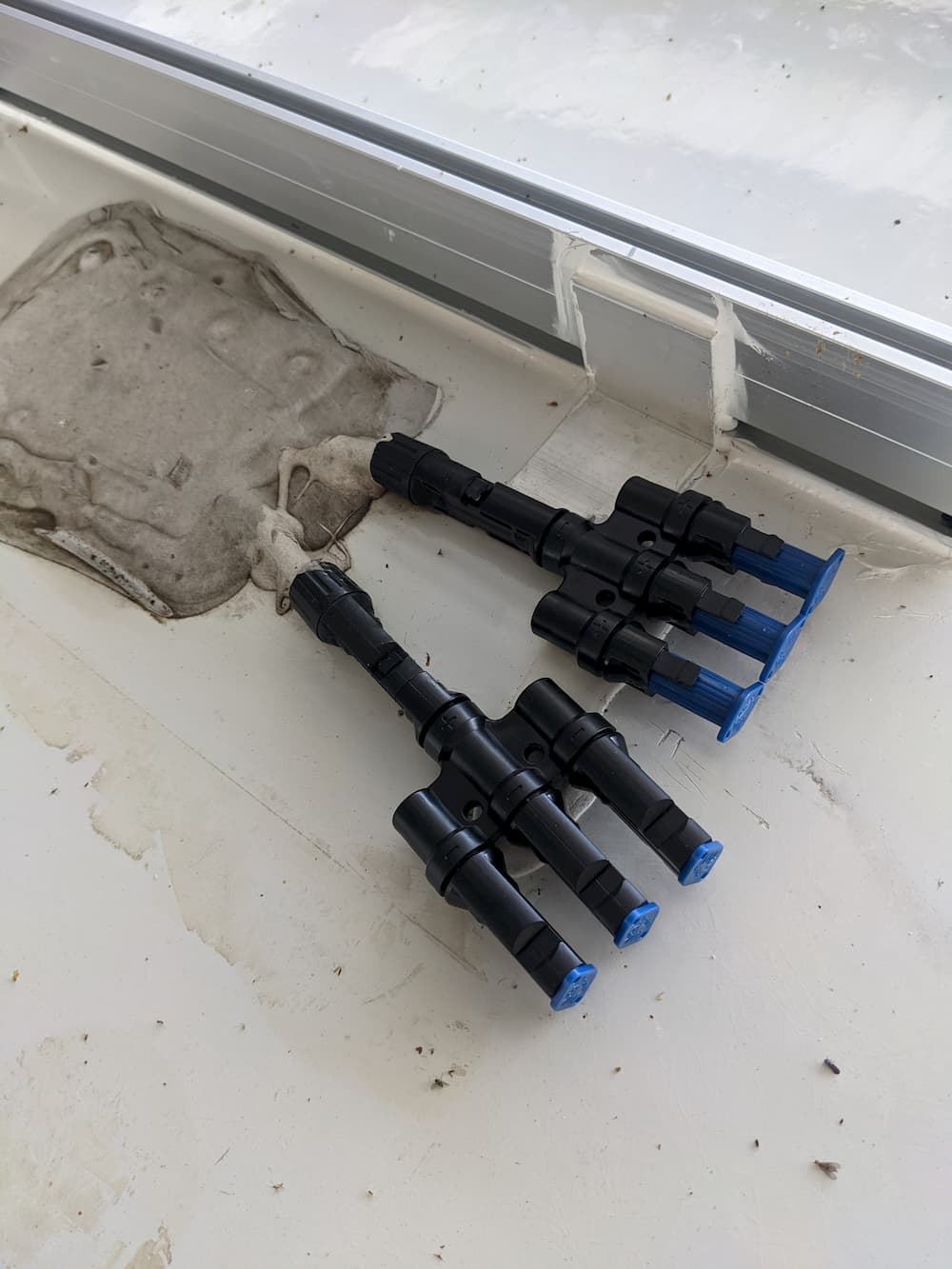 Now that the signage is prominent in your photo, it reminded me of the same sticker on mine. "Do not step beyond this area". Why is that there? And if one isn't supposed to step past it, why have anti slip tape further toward the front and components that need cleaning/servicing beyond it?

RV2019 said:
Now that the signage is prominent in your photo, it reminded me of the same sticker on mine. "Do not step beyond this area". Why is that there? And if one isn't supposed to step past it, why have anti slip tape further toward the front and components that need cleaning/servicing beyond it?
Click to expand...

I'm assuming its there so that after you slip and fall off the roof head first, when you finally get your day in court, the LTV lawyers will say that you ignored the signage. And even in your wheelchair, with a drip cup held to your chin to catch your spit, the jury will take pity on you, but agree that you shouldn't have ignored the warning and award you exactly zero.

TampaSteve: Your installation looks very nice! I agree that the rails are probably more work to install than some of the other options people have used but the ease of panel replacement/changeout or just simple removal to clean under the panels are what I am counting on being the big positives for this system. I’ve also noticed that the rails raise the panels up higher so they are less affected by the shadows from the AC or TV Antenna.
I finally found solar panels that will fit in the 2 open spots I have left on the roof! I wanted to use the Renogy 80 watt panels which they don’t make anymore and the only on-line seller wants more than I was willing to pay. The problem is that I only have 35” length wise and most panels are around 40” long. Width isn’t as big a concern in this instance, anything up to 24” wide is fine. The other concern is getting matching output voltages from new panels with the existing 100 watt panels. I found 75 watt Newpowa solar panels that are 33.5” long so they fit with room to spare. Vamp is 17.0v so placing 2 in series gives 34v. I ordered 2 panels, now waiting for them to show up. I need to get some more mounting rail and bolts also. Hopefully we will get a couple of days of warmer weather here in Michigan (running mid 50’s lately) so I can get them mounted. That puts me up to a total of 750 watts on the roof. I will also have an additional 200 watts from the old flex panels that will be available as portable panels when needed. Got the 20 ft solar extension cords today along with a 50 amp Anderson connector for connecting them into the electrical system. I think I may use the old GoPower PWM controller that I removed from the RV as the controller for these panels as not to overload the Victron MPPT 100-50 solar controller.
2018 Unity TB

DiverBob: 750 watts, or even potentially 950, is a righteous amount of solar! I think I'll be settling for 600, at least for now. Even with my insanely power hungry compressor fridge that should hold me. I don't think I'll ever remove the panels except for replacement. While torquing them down I ended up loosening one bolt and I noticed the "UFO" really distorts the solar panel frame and leaves a noticeable depression (by design). Probably even more noticeable as I have the black framed panels. The manual also says to be sure and move the panel at least 1/16" if you loosen it to avoid re-tightening over the depression.

Also I still have a little roof real estate left over for future goodies like a Starlink ground station over what used to be my microwave cabinet.

I've attached 5 panels. I'm going to wait a bit longer for #6 to avoid disturbing the 5200. I think next Thursday will be 7 days finally. 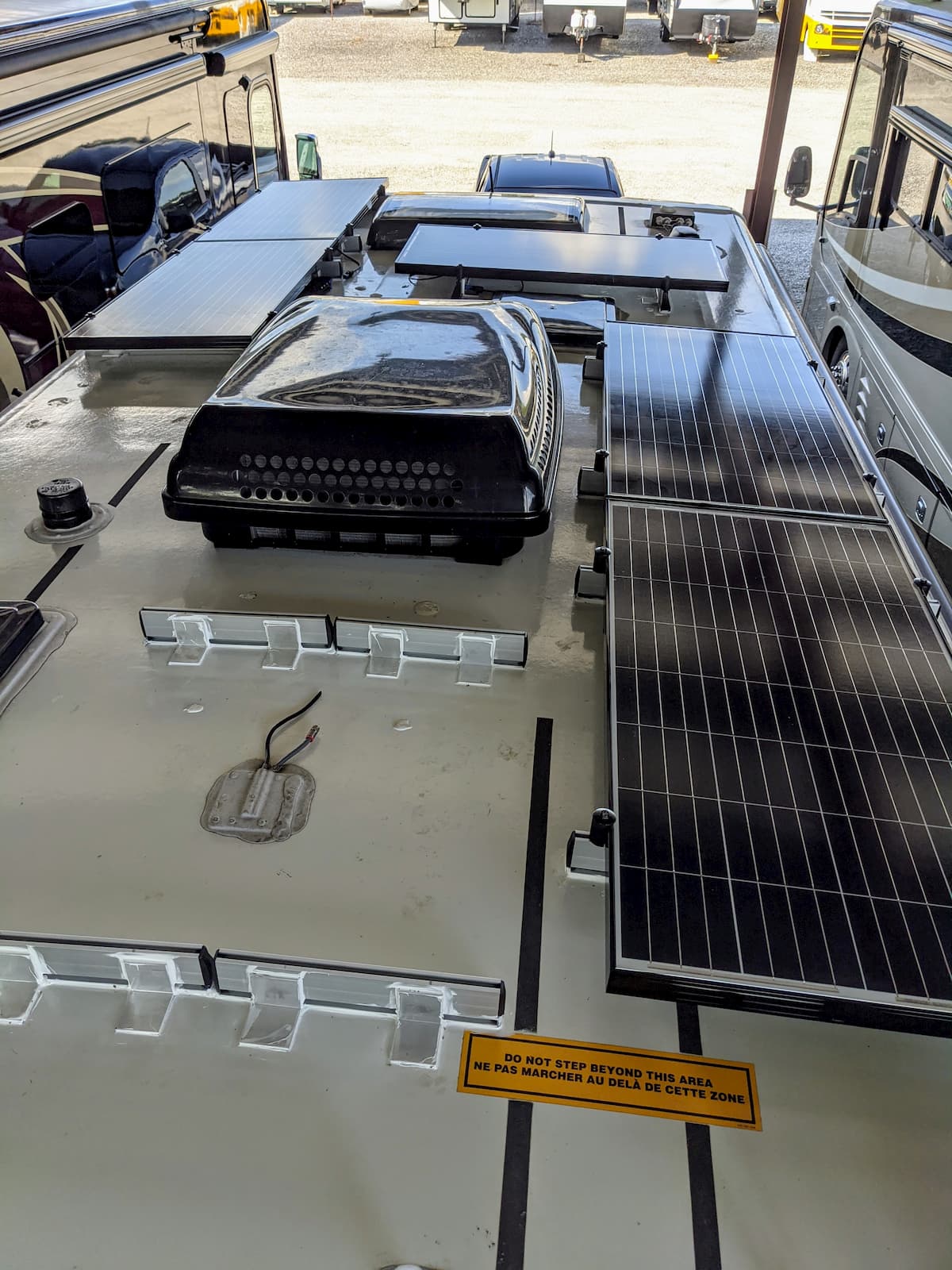 msmolow said:
Did you use a torque wrench for the UFO? 80 in-lbs?
Click to expand...

No, I did not use a torque wrench on the hold down bolts. You can ’feel‘ the bolts bite into the panel frame and they hold pretty securely. When I put on the 2 new panels I will recheck the existing bolts and verify they are still tight. An earlier check of the bolt tightness didn’t reveal any loosening of the holddown bolts.
2018 Unity TB

msmolow said:
Did you use a torque wrench for the UFO? 80 in-lbs?
Click to expand...

Gawd, that looks good... Nice work. I'm telling you: a bunch of us in this forum could put AM Solar out of business. Anybody want to work that hard?
Kelly

Ha ha! I’m retired and planning on staying that way! But it is fun to design and put this together.
2018 Unity TB

I'm not for hire, but I'll help anyone who wants to DO It For Themselves! I agree it's fun, but stuff stops being fun when you make it a job!
SSTraveler
2014 Unity Murphy Bed/2014 MB Chassis

Got the crimper yesterday and was surprised to find that was the fun part - making extension cables and plugging in the first pair! I don't think I'd be able to help putting AM Solar out of business though. By the time I finish my jobs, most of the old geezers - that would be our customer pool - would have expired waiting for me to finish.
2019 Unity CB (2018 Chassis)
D

Tinkering is fun and I like helping out others that have questions if it‘s a subject I feel qualified to respond to. Helping other DIY’ers is a blast but I like the freedom that being retired gives me, doing this as a ‘job’ would seriously crimp my traveling! I agree what TampaSteve, I like to take my time and some people wouldn’t or couldn’t wait that long!
2018 Unity TB
D

Bought and picked up additional rail and hardware for the next 2 panels. Need a warm day to get on the roof to clean and apply the rails.
2018 Unity TB
You must log in or register to reply here.
Top Bottom