Should I replace my fuel injectors?

Have to make a decision about fuel injector replacement or not. Situation, 2008 Sprinter 2500, 3.0 meticulously maintained., 345,000 miles Absolutely no indication of fuel injector problems (smooth idle, no smoke, decent fuel economy (up to 21 mpg highway loaded, 17 around town). #6 and possibly #4 injectors have just begun to leak (almost no tar residue around the injector). Replaced the injector seat in #3 about a year and a half ago. The correction values are 27 for cylendars 1,2,3,5 and 33 for cylinder #4, and 17 for #6. Please advise if I should replace all my injectors now? Or wait for symptoms. Of course I will be pulling #6 and possibly #4 to replace the copper seat. Any advise is much appreciated.
Last edited: Aug 31, 2020

If you have the money, as long as you're in there, why not? You can send the injectors out for Bosch evaluation and testing. Be aware that typically the injectors will "fail". The reason that they fail may or may not be critical to proper operating. Failure isn't always an indication of over fueling or imminent doom. There are many parameters that are tested. If all of those don't meet factory specs, they fail.

Being that you indicate everything is running well, if funds are a bit tight I wouldn't feel that it is absolutely necessary to change them out.

vic
DAD NAS (N. Amer. Spec) 2004 140 2500 >335,000+ mi. Arctic Whitewash Brush-tone Grey
2006 Freightliner 140 2500HC >183,000+ mi. Arctic Whitewash (Spotted Snow Leopard accents)
"My opinion and worth everything you'll never pay for it." assumed.
Anyone can hold the helm when the sea is calm. Publilius Syrus
"There are only 10 types of people in the world: Those who understand binary, and those who don't." HaWiiLuVeR
16 ounces of unnecessary prevention can be worth a pound of manure.

Durasealco3 said:
Of course I will be pulling #6 and possibly #4 to replace the copper seat. Any advise is much appreciated.
Click to expand...

Use NEW stretch bolts whenever pulling an injector and make sure that the threaded hole is clean and dry. Follow torque procedure.

And if you don't already have the appropriate wrenches for the injector and rail nuts, these offset box wrenches can be modified to work. The 17mm/18mm for the injector/rail and the 22mm can be used for sensors, all for under $20. Besides cutting a slot, the 17mm injector wrench may need to be ground a bit around the offset box to fit flush at multiple angles.

Personally given how inexpensive the copper seats and the stretch bolts are I would be inclined just to change them all at the same time (the seals and bolts I mean, not the injectors).

Take the opportunity to clean the injectors, inspect for any carbon build up or damage etc.

While they are still working without symptoms I really don't see any reason to change them prematurely (this time I mean the injectors) - but I'm no expert on the matter.

My only experience with injectors was having to remove them after a case of 'black death' which did involve an awful lot of cleaning. I sent them off to be tested where they were also throughly cleaned (I suspect in an ultrasonic cleaner - but I don't know for certain)

The van has run without a hitch since then and it's stopped running rough and surging at idle. Turns out injectors are more resilient than I'd imagined!
MWB 2008 Mercedes Sprinter 311 CDi (UK RHD) in the faster DHL Yellow colour
L

Well I have some experience to add based upon experience & practices .
Hark back to 1956 and I removed & changed some injectors under my dad's tutelage on a Gardiner 6 LW engine . (my first diesel job)
Once I had dragged them out , the instruction was number 'em lad, in cylinder order, and off they go the test house for checking.

Fast forward a bit to 1964 as 16 year old and a factory apprentice the same instruction with a qualification.
Water in the fuel 'n bad maintenance does 'em in Laad, send em out for checking--NOTHING goes back in without a check.

Fast forward some more to 1974, and as a technical instructor for B/L and the edict from the plant was test all removed injectors for test once disturbed.
Today running our own US based business since 1994, the same mantra applies, ALL disturbed injectors & those from failed engines go out for test.

The same discipline as it was in 1956 and my coveted wooden box of Gardiner Engine special tools and the removal of the injectors with special tool ands the numbering stand for test.
Dennis

I received the exact same advice when I was deciding to brave my first injector removal which is why mine went off for testing.

I felt it was money well spent. Shop around. My local specialists were double the cost compared to what a firm in Scotland charged me (the other side of the country to me) to perform exactly the same tests.
MWB 2008 Mercedes Sprinter 311 CDi (UK RHD) in the faster DHL Yellow colour
L

Yes prices vary , to put the injectors on their special test stand.
One of our local Bosch services was bought out/merged by a bigger multi state FIE business .
Apart from the usual services we "enjoyed" injector testing and turn around time all went into the "chamber pot" so to speak! So did the price which was akin a gold plated royal chamber pot!
So I too shopped around and got the same service & price we enjoyed before . $35 per injector.
The downside, I have to ship them to another state for that test pricing.
Remember always that all businesses have different overheads and pricing. so it explains (in part) why pricing differs.

I would imagine these days if you had an FIE shop in the London area the cost of doing business will be far higher than one in say at "Tannock Bray" in the Hebrides .
There might be a cost for interpreter fees though when discussing a topic with someone out in the Western Isles!!!!

Looking at the big picture the cost of replacement injectors for T1N's and 906 Sprinter again varies from supplier to supplier and that is where the customer resistance generally towards testing and replace where necessary is encountered .
That incidentally has always been the case, even going back to the 1960's and having to deal with coal merchants, tight arsed farmers Irish showman fair ground workers, circus clowns, and those what the US "speak" labels as financially challenged, and what was referred to as skint .

The cheapest injectors as we know by forum posts on this side and seem to get great acclaim on this forum are in fact in house rebuilds.
The issue with "in house" rebuilds is what if?
If there is a failure within the warranty period that /those injector(s) have to go back to the re-manufacturer to pursue a claim .
If successful you get a credit, & in the meantime you might have to buy yet another replacement set at the shop where you are', That obviously can involve additional diagnosis and install charges (if applicable) in another state.

Now our company policy is to install genuine MB re-mans which carry a coast to coast no quibble warranty at any MB dealer
Sure you are paying about 25% more, but you get peace of mind which has to be worth something. I will leave the reader to chew on that statement !!
Really again boiled down its just the same as the 1960' s.
Working in a dealer /factory sub truck repair shop, as an apprentice, genuine factory supplied injectors were installed & if there was a failure under the warranty period ./scheme it was covered by a factory dealer with no quibble/no additional cost replacement.
In fact I/We have just done this with three injectors installed in a 2003 Sprinter at in Texas MB dealer that failed here in Colorado.

You know over the years I have been in this business & all too often I get comments about changes with vehicles over 50 years.
Yes there have been enormous changes, but one thing stays the same & that is people/customers & funds to fix & that hasn't changed one bit !

Everyone wants a miracle no cost repair, which of course never happens!
Its even "international", and I can remember someone in Caracas saying to a skint customer with a Buick Centrury "Senor disculpe pero milagros No Hay !
Dennis
Last edited: Sep 1, 2020

Sent mine to Edinburgh - but I used to live not far from there so I didn't think I'd need an interpreter.

Turns out the company is run by a friendly Turkish chap so that didn't help. Luckily he spoke excellent English and I remembered a few words of Turkish from my thoroughly enjoyable trip there last year.

For anyone in the UK reading this thread in the future, the company was Edinburgh Diesel and I was very happy with their service - especially at a time which was difficult for them due to having to close for Covid-19
MWB 2008 Mercedes Sprinter 311 CDi (UK RHD) in the faster DHL Yellow colour

In the past, replacing injector tips was part of the maintenance for high-mileage diesels.
Now getting cheap part is almost impossible, while set of new injectors can cost more than van value.
Would anybody find a source of injector tips, post it here with highlighted title.

I've just took the plunge and ordered a replacement: 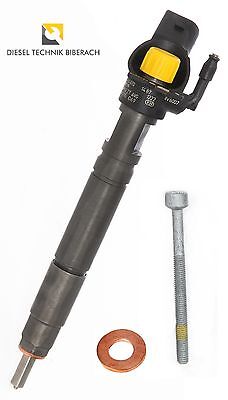 Interesting. That part is being sold as remanufactured. My injector guys told me that these injectors were not refurbishable.

There's no value judgement in my observation as I don't know anything about rebuilding injectors.
MWB 2008 Mercedes Sprinter 311 CDi (UK RHD) in the faster DHL Yellow colour
E

So, I thought I'd feedback my experience:

Old injector came out fine, was bathed in copper grease and I'd been applying liqui moly injector release for a few days - cycling the engine hot. Got the engine hot (78°C) and went for it. Bolt came out smoothly.

Replacement injector came with paperwork for return of old one for deposit and the bench test results including the new code to program to the ECU to "trim" the new injector.

The supplied bolt was around 3mm shorter than original MB (see kit) with a hex head rather than Torx. I didn't like the look of the new bolt so I ordered a replacement holder kit. The copper washer supplied with the injector was thicker than the original, again, as I had not done anything other than cleaning the bore, I used the thinner of the 2 supplied in the separate kit.

Vacuumed/blew out the threaded hole. Wound the new bolt down a few times to be sure it was clear, copper greased the injector, slipped it in (oh er missus) and bolted all down. The 2 x 90 degrees after 7nm is a ball tingler but I trembled it round twice and breathed .

Reconnected all hoses, cables and programmed the new injector code to the respective cylinder - took a while to find where to do it on my Chinese star C3 and DAS but once I got to it it was really simple.

, turned the key crank... crank...boom. Bit of a rough second or 2 then ticked over perfectly.

Only had a chance to run at idle for 10 minutes while packing tools away but so far so good. Really good service so far from the company - came really well wrapped and packaged, all relevant Bosch documentation and quick delivery. Got to send them back old injector and they will refund the 50 euro deposit.

So far, so good...
You must log in or register to reply here.
Top Bottom