A thousand Ram Van curses upon you!

This recent post from guy on the PM forum whom I totally trust. He is referring to a job he would do for another:

What do you do if you have a

ECU said:
The spark plugs on my T1n are impossible to find, much less remove.
Click to expand...

Well duh, just trace the wires from the distributor cap for crying out loud. Oregonians...
L

MsNomer said:
This recent post from guy on the PM forum whom I totally trust. He is referring to a job he would do for another:

Probably a freshened up take out.
A Jasper rebuilt with ALL the improvements over a Mopar Build is $4200 exchange retail.
Its a long block so some dressing is involved and the dress kit is $175 extra retail.
Often the inlet plenum isn't in great shape so add $500.
There is about 40 bucks involved in exhaust gaskets for the Cats & link pipe.
Fluids extra,
For $3000 its a crap shoot what you are getting. Beware of cheap remedies and the trade forums are is riddled with posts about cam phaser /timing issues after tear downs & installs means a fair majority run into remedial work even when supposedly "rebuilt".
Std book time is 11 hours.
Dennis
.

Bobnoxious said:
What do you do if you have a


Well duh, just trace the wires from the distributor cap for crying out loud. Oregonians...
Click to expand...

Bob
The gasoline engines of today are just about all coil on plug applications, so "HT NO WIRES"!
Gotta know the cylinder counts & configs.
Dennis
B

lindenengineering said:
Bob
The gasoline engines of today are just about all coil on plug applications, so "HT NO WIRES"!
Gotta know the cylinder counts & configs.
Dennis
Click to expand...

Well... thank you Dennis for your kind, and thoughtful correction but...was, am aware of which you profess.

Just side story. A long time ago, a fellow employee said his truck was running rough and asked if i would take look. We were working swing and at end of shift we popped the hood. Upon power-up, all the plug wires glowed like a neon sign. Before the owner could exit the vehicle, I closed the hood...err Bonnet and announced my diagnosis, "Plug wires, you need plug wires",

Rumors about my faux Diagnostics prowess didn't take long to spread,. "Bob just looked at it knew right away". Like a magician, I didn't disclosed my secret.

A total fluke I say, had it been daytime, I probably would got the snot zapped outta me but It was certainly nice to bask in the glory of exaltation, even for only a moment.
Last edited: Sep 15, 2020

There was the evening i popped the hood of a classic (pre-1965) Jaguar sedan in a poorly-lit garage...

The entire wire harness (not just the HV wiring) was twinkling like Xmas lights, shining through the woven loom wrappings.

--dick
2005 T1N 118" Freightliner 2500 Passenger Wagon (2.7L, 15" tires, standard (short) roof)
Get YOUR Sprinter's full configuration datacard by entering your VIN to https://www.datamb.com/
http://diysprinter.co.uk/reference <-- lots of service documentation, Thanks to Jens Moller and Arnie_Oli
((as always: this post may go through a couple of post-posting edits... so maybe give it ten minutes before commenting))
G

autostaretx said:
There was the evening i popped the hood of a classic (pre-1965) Jaguar sedan in a poorly-lit garage...

The entire wire harness (not just the HV wiring) was twinkling like Xmas lights, shining through the woven loom wrappings.

Not named Prince of Darkness without a reason.

My 59 Alfa was blessed with Lucas. Learned to park on a hill to roll down for starting.

AND then there was Magneti Marelli !
Dennis
L

ZekesAutowerks said:
Feel the pain, i had to do warranty work on the VW Routans when i was at the dealer. GARBAGE.
Click to expand...

Oh I am chuckling!
What about Tuareg V10 diesels--OMG Garbage as well!
Dennis

lindenengineering said:
Oh I am chuckling!
What about Tuareg V10 diesels--OMG Garbage as well!
Dennis
Click to expand...

Actually really like the V10 Touaregs, once the driveline is out they are easy. Pulled quite a few in my day. 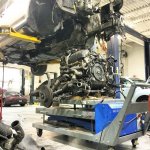 Two at once one time ha!

lindenengineering said:
AND then there was Magneti Marelli !
Dennis
Click to expand...

And Valeo starters in airhead BMWs. AGHHHhhhh!
"Frito": 04 Hi-Roof 140 cargo. New to me in 2008 9800 miles by PO
"Travels With Frito" Global travels by van, motorcycle and other www.petercmclennan.com
Absent this forum, I'd never have bought a Sprinter.

I did. Yikes!
"Frito": 04 Hi-Roof 140 cargo. New to me in 2008 9800 miles by PO
"Travels With Frito" Global travels by van, motorcycle and other www.petercmclennan.com
Absent this forum, I'd never have bought a Sprinter.

Well on a diesel Tuareg V10 try changing the A/C compressor sometime.
Driven off the back of the engine by a tooth cush drive and a short shaft, the customer had a DIY "bash" !
He got it out with a bit of busting deformity of the engine appendages, but couldn't put it back in to align the cush drive without it being absolutely square to the internal drive. He had already ripped up two expensive rubber cush drives before throwing his torn up hands in the air .

The thing floated about amongst the Pro shops in the Metro area, like turd in a punch bowl, all getting the sign of Dracula! It end up in my shop on a hook.
With Dennis UFix we are out on this' un!!

Took one look! What a pile of cobbled together crap !
Now I am a bit wary of VW Audi stuff at times, especially with Audi All Road's junk because of the biggy! -customer neglect, poor maintenance, plus the universal problem of NO MONEY to fix it.

I often think why do Yanks buy this crap in the first place, when they know its going to be a wallet flush to fix it in most circumstances.??

Book time was 13 to 18 hours to fix, (Audi Porsche dealer quoted 24 hours cool ) whereas the V6 gasser petrol version was a 3,5 hours call !
Not our usual fare I pushed out an inquiry through the trade forms & the Audi Pros near me that mighty have struggled on this job as acts of masochisms !

I got back, its an engine out job really, but beware if you have the thing on the hoist, being very imbalanced! A written warning!
Without the power pack bolted in, it will do a back flip like an Olympic diver off the hoist !! So chain the effing thing down! Oh me Gawd !

So to teach a student in the Audi Super duper expensive Audi program in college a lesson I said -"Nick you can have a bash at this un!"
Start with radiator/cooling system because I have a bit of a hunch to do this without pulling /.dropping the power pack.
Once out the way and with the driver's engine foot off, you could just about stab the compressor into the drive arr'.
After fixing all the busted appendages and deformity from frantic DIY removal it worked.
T'was an 18 hour job on a Tuareg!! Whoopty do!

A/C system worked as expected, but as usual the car was marred by poor electrical circuits everywhere and gash wiring harnesses, typical of turn of the century German stuff! No emulation of Ford's ISO 900 wiring standards, nor Sumitomo excellence found on Lexus to be found; here which destines the crap to an eternity of customer penury at a dealership trying to make it all the electrical functions "do their thing" . Good shop money spinner for sure!
Then it gets traded for more crap which puts shop profits up!
Wonderful really is this velocity of money, its all spinning about with tyre skidding, mid boggling bend hugging speed synonymous of the Audi/Porsche brands we see on the Tele. Most of it is worthless on ice & snow but that is another story.
But there is always Landrover . Now there I smell money !
Dennis
Last edited: Sep 29, 2020

That sounds like quite a job Dennis.
BTW we have not seen you in the DZ in quite a while?
"I will never give up fighting for you and our nation," DJT

So back to the Promaster V6 gassers AGAIN no less!

The latest issue to challenge us wrench wielding spinners are high head gasket failure incidences .
Boiled down being an open block (a la Renault ) the individual cylinders in the block are moving about like the Tower of Pisa doing a dance of the sugar plum fairy .

So the new fix is introduced to insert two verticals pins down the coolant jacket side of each cylinder to arrest the movement and secure each cylinder in the block to improve head gasket sealing.
I suppose one day they will get this right will FCA--with the help of Jasper !
Dennis
D

Do you have a picture of the engine block with the head off?
L

Well I can go one better watch this:_
The engine production line and stop the film at about 3,19 minutes and you can clearly see the split between the cylinder sections which now have the pins inserted into them to correct movement

Here's another view of blocks about 50 seconds into this film clip.

Whatever you might criticize FCA about, I like the automated production line, and "plant life" giving employment to American workers.
So top marks on that!
This was my life in several Euro truck plants in service support!
Note robotics!!
Leoni
HQ in Germany they have an Americas division .

You have to support the American industrial worker making things people want to buy !
Dennis