Credible automotive sources have something to sell.
SD26

VanGoSki said:
However, if you read through this thread, there's evidence presented by knowledgeable folks that using these devices may actually be detrimental. You had one person post a picture of the inlet of his turbo with a puddle of oil that bummed him out. And you had another member mention that oil introduced into the turbo is beneficial. Who are you going to believe? Personally, I think I'd lean towards the MB engineers who designed the engine.

There's also been evidence introduced that says it's bad to add complexity and backpressure to the crankcase vent system. And if it freezes, your engine is toast. What's this do to your warranty if you end up damaging your engine?
Click to expand...

You mentioned some of the downsides including poor implementation, under-sized units or fittings and potential seal issues in very cold climates. Catch cans aren't generally used as OEM equipment because they are not set-and-forget, people barely bother to change their oil. I'm willing to go to a little extra effort now to prevent sludge buildup later.

One appealing feature of the Provent is the pressure relief valve that would activate in the event of a clog or a hard freeze. It is also properly sized for our engines, 4 or V6. Provent is made by Mann-Hummel, whose name you will see stamped all over our Mercedes engines. I wouldn't trust 99.9% of the catch cans you see on ebay on amazon.

The PCV is right on top of the engine on an OM651, which would put it right above the turbos to reduce opportunities for freezing, so it looks somewhat straight forward to implement.

I've posted this photo before, but my Volvo 850 Turbo had a factory-installed catch can and the intake runners were surprisingly clean for a 140k mile vehicle. It's the black box to left of center, with PCV entering it from the top (from the valve cover), through the box, and back to the intake, with a drain at the bottom. 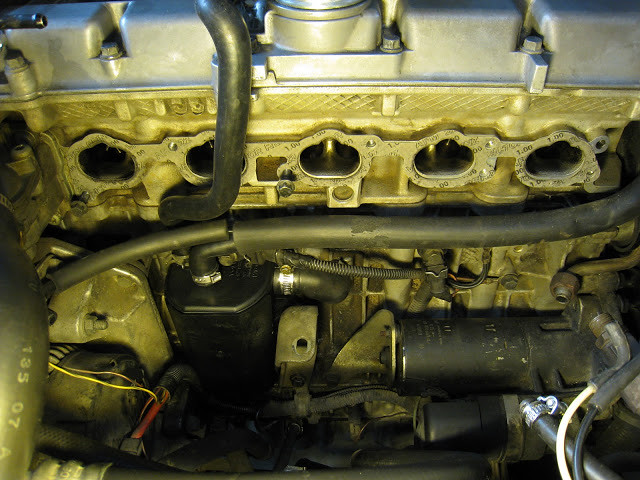 Volvo had it set up to drain back to the oil pan, which I would not do on the van.

EvanS said:
I did a bit of searching for this but there doesn't seem to be a huge number of posts for oil catch cans. Hein, did have three photos posted for this (of course he did) but I figured I would add what I could after doing the install myself.

Well, simple - I didn't want the EGR gasses containing oil to recirculate into the engine intake. If too much oil enters the intake it is known to coat the walls of the engine with oil which allows carbon build up. Having owned a BMW with the N54 engine I know this is a serious issue that should be avoided. However, there doesn't seem to be a dedicated oil catch can system you can buy for the OM642. I was told to buy this catch can which seems to be a top of the line catch can and has hoses that will work with the Sprinter system.

After taking the EGR hose apart and removing the air intake to the turbo, I found oil in the system :-( I was especially bummed to see this given that my van has 4,100 miles on it...

Anyway, here is a link that should show what I did and how I did it.

All hoses are 3/4
I cut into the EGR hose close to the firewall and then discarded the rest of the hose.
A 3/4 - 3/4 hose connector was uses to connect the EGR output to the hose that runs to the bottom of the catch can.
Click to expand...

Thanks for the post, I have the same catch can ready to install on my new VS30 4x4 Crew, as soon as it gets here in hopefully several weeks. After looking at many different catch cans this one was my choice, although the Provent (if that’s how it’s spelled) was my next option. I’ve always installed catch cans on any of my forced induction engines, on non forced induction I never worried about using a catch can. Again thanks for the write-up

Note to self; stay in der DZ.

lndscpe said:
Thanks for the post, I have the same catch can ready to install on my new VS30 4x4 Crew, as soon as it gets here in hopefully several weeks. After looking at many different catch cans this one was my choice, although the Provent (if that’s how it’s spelled) was my next option. I’ve always installed catch cans on any of my forced induction engines, on non forced induction I never worried about using a catch can. Again thanks for the write-up

Have you installed the catch can yet? Im thinking of putting one on my 2020 crew I was looking at the terratuff SEPR8R from Australia. Was it a hard install?
D

Yes I installed the can from Australia and took pics of the process but the pics seem to dark to be of use and me getting them from my laptop to here, well I might try. I have the 4 cyl in a 2015 sprinter and went to the local MB garage and talked to the mechanics to make sure I was cutting the right hose. The MB hose has two different sizes so must be used and cut. Wanting a professional look I bought al. billet hose line separators(3) stainless steel 3/4x3/4x90 degree barbed fittings(2) and single ear crimp hose clamp kit from amazon. I also ended up using only one of the hoses that came in the kit and went to auto zone matching it up with a hose they had. I made a post out of SS channel I had on hand and attached it to the passenger side fender and then the can to it. Hope this helps Let me know if the down load worked or if I sent something I should not have! Later Dan

Glenn233 said:
Have you installed the catch can yet? Im thinking of putting one on my 2020 crew I was looking at the terratuff SEPR8R from Australia. Was it a hard install?
Click to expand...

Oil catch can debates go on, some will install and some won’t. I’m in the party that will. I usually install an oil catch can on any of my forced induction engines. Natural aspirated engines I usually don’t bother. On the OM642 V6 Diesel I felt it’s a worth while item to install and here’s...
sprinter-source.com
You must log in or register to reply here.
Top Bottom