First off, sorry for the wall of text below. I wasn't sure how to tell this story shorter.
The short-short version - I was able to resolve a P0753 solenoid error code by disassembling and cleaning the valve body and replacing the conductor plate.

Many thanks to everyone over the years who has posted about oil changes for the T1N transmission. I had a few unique things that I think are worth posting about in case anyone else has a similar issue.

First, some history - I'll try to be brief, but it's relevant to my decision to tear apart the valve body. My sprinter is a 2006 T1N passenger van. Just rolled over 100k miles. In the past, I've not done the maintenance myself, but taken it to a local shop.

The first shop I went to claimed to be great with Sprinters, but routinely messed things up. They'd overfill the oil at oil changes. I had them do the scheduled transmission maintenance at 60k miles, and had a fluid leak for the next two weeks. I took it back to them twice (they kept torquing the pan bolts tighter) until taking it to a transmission place that said the 13-pin connector up top was the source of the leak.

After this, I switched to a different local shop -- they did great work, but were on the "Holy Cow!" side of expensive. I started half-joking that they were just papering over the bottom of the sprinter with dollar bills, and every time they started to wear off I had to come back in with another big stack.

So, the really relevant part: I had a limp-home-mode problem with the transmission around 75k miles (stuck in 2nd gear). They checked the transmission, found that the filter had been lying in the bottom of the pan, replaced the conductor plate, did a transmission service, and I was back on my way. I think they charged me around 1500 for the whole thing.

Fast forward to last month -- after about an hour of highway driving, the van had a really hard shift down when coming to a stop, the check engine light came on, and I was back into limp-home mode.

Took the van back into the shop, and they tell me that since they already did the conductor plate, they want to replace the entire valve body at parts+labor coming in around 2500.

I wiped some of the dirt off my jaw after picking it up off the ground (where it had landed after completely falling off), then went in and limped the sprinter back home.

I've been a long-time lurker on these forums, so I figured that I would read through, and take my best shot. After all, it was already broken, right? What could go wrong?

After lots of reading, I ended up picking up an Autel MD802 scanner to use. Got it off Amazon for $228. Since there was some uncertainty on the scanner forum, I want to publicly state that this scanner both reads and clears the codes in the transmission control unit for a T1N sprinter, and is more than sufficient (from a scanner standpoint) for handling limp-home mode issues.

Based on my readings on this forum and elsewhere, it seemed really unlikely that the solenoid itself was bad.

So, I think to myself -- this transmission was running for at least 20k miles with an improperly fitted filter, the solenoid can't shift, maybe the valve body has some obstruction.

I decided to take apart and clean the valve body. I used this video as a guide:
https://www.youtube.com/watch?v=agQ9VYaGQ78

The video is from a Benz E320, but it uses a 722.6, and the valve body was functionally identical.

While looking around at how to do this, I came across videos referring to the Sonnax overlap control valve sleeve kit.
https://www.amazon.com/gp/product/B01IDCIXUK

Again, thinking to myself that unfiltered gunk may have been flowing through the valve body, this seemed like a good idea.

and by this time I was thinking "Why the heck not?"

So, I built myself some 6" ramps out of 2x10s (couldn't quite get myself to trust a plastic Rhino ramp for what I supposed would be long-term elevation). There's lots of room under a Sprinter, but I'm a big guy, and I like my elbow room.

With the front end elevated 6", I started draining the transmission pan. Here was my first surprise. I used my 7 quart drain pan, expecting to only get the normal 4 quarts out of the pan.

When I came back, the fluid had filled the pan to just barely under the edge. After dropping the pan and getting the rest of the fluid out of the bottom (and with what came out of the valve body), I drained about 7.5 quarts.

I had originally planned on draining the torque converter, as recommended on these forums. However, it was apparent from the amount of fluid that the converter had already drained.

I dropped the valve body and began disassembling (as per the above video). This went really well, aside from realizing halfway through that I didn't own a torque wrench capable of going down to 40 inch-pounds to reattach the valve plates.

I was glad that I took the valve body apart. There was a surprising amount of gunk built up on the separator plate where the fluid was running through.
All 12 check balls (8 metal, 4 rubber) were in good condition, unmarked, etc.
I took out and cleaned the screens, used liberal applications of brake cleaner on both the upper & lower halves of the valve body (and the separator plate) and got everything shiny and new looking.

I was also glad that I had picked up the Sonnax kit. The overlap control valves were showing very noticeable wear and scoring along the sides.

I'm not sure if the transgo shift kit made a significant difference. I closely examined the pressure regulator and lube regulator valves being replaced, and didn't see anything out of the ordinary. However, at this point, I was in for the whole hog, and replaced them anyway.

I reassembled the whole thing, put it back in, put the new connector on, reattached the pan, filled the fluid, cleared the codes using the Autel MD802 and went out driving.

The first couple of shifts from 1-2 were a little rough -- like running over a small bump in the road rough. After that, though, everything shifted smoother than butter. No recurrence of the error codes after over an hour of driving.

I hadn't realized this, but I had developed an unconscious habit of easing off the accelerator every time I came to a shift point, so that the shifts would go better. This was no longer necessary. You almost couldn't tell without looking at the tachometer that there had been a shift.

So, happy ending, everything's cleaned up, taken care of, and working better than ever for about $350 in parts (plus the $220 for the Autel). Way cheaper than another half-inch thick layer of dollar bills for the shop to use to cover the bottom of the van with.

Driving up on ramps to drain the torque converter is way easier.
The Autel MD802 is awesome (for this vehicle).
Redoing the valve body was really easy to do with the above video help.
Happy with the valve replacements!
If I can do this, anyone can. This is my first major job on any car ever.

Following up on this. Has anyone else tried this out and had any luck? Aaron, can you provide insight into how long this lasted? My transmission is starting to act up.

Still working great for me.
'Acting up' could be a whole lot of things, are you getting any diagnostic error code?
K

kayakkingoz said:
Did you need to get different cable so Autel unit could be plugged in to a sprinter (Where did you get it). I just bought one but it has incompatible cable.
Click to expand...

If you have the round MB 14 pin connector you need either an OBD adaptor lead or preferably the Autel adaptor... 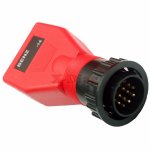 My 2006 T1N has the standard 16-pin rectangular OBD connector underneath the dashboard, really close to the hood release. The Autel 802 that I purchased came with the correct 16-pin cable to attach to this.
If your T1N has the round MB connector instead, you would want the adapter that Keith mentioned.
You must log in or register to reply here.
Top Bottom