I recently replaced the OEM head unit with a Kenwood Excellon and a PAC RP4.2-MB11 Wiring Interface. Purchased from Crutchfied. I didn't like having to add the Kenwood microphone so I traced out the original mic wiring.

The Mercedes mic is located above the overhead light unit. Two wires, purple and grey, which terminate in the radio wiring harness white sub unit. Confirmed with a continuity test.

I would have preferred to add a pin out to the PAC RP4.2-MB11 interface but couldn't find any online so I tapped into the wires before they entered the sub unit. For the Kenwood I used a 3.5 mm mono plug to bare wire, available on Amazon, wiring the purple as positive.

So far it's working well.

Where is the plug pair shown in the second image located? I have a 2014 chassis dating to when LTV was installing non Mercedes head units and am wondering if MB put a mic up there anyway. I hate having an external mic exposed.
Alan Lichty
Mistral - 2014 Unity TB
Vancouver, WA
M

I took the picture to remember the wire colors not to document the install. I did not think to document until after I closed everything up. Sorry.

Here's a stock Mercedes dome light unit I downloaded from the Internet. You can see the grille. The plug pair is mounted to surface you can't see.

Yeah - that looks exactly like mine including the grill. I will pop mine out and see if MB just includes that as part of the dome light assembly. I'd love to use this with my Pioneer AVH4100NEX head unit.
Alan Lichty
Mistral - 2014 Unity TB
Vancouver, WA
W

I recently replaced the OEM head unit with a Kenwood Excellon and a PAC RP4.2-MB11 Wiring Interface.
Click to expand...

What control/interface functions, if any, did you lose with the wiring harness you used?

Also, which Excellon did you end up using?

I lost radio text on the remote dash display behind the steering wheel, but all steering wheel buttons continue to function and are programmable. Mercedes dash information is unaffected. I think the idatalink maestro harness maintains remote text but they do not make a harness for Mercedes. The PAC RP4.2 MB-11 which I used maintains all functionality except the remote text.

Kenwood DMX905S. I like the Kenwood but the Sprinter cab is so wide the LCD display is dull because of the wide view angle. I have to lean 6 inches to the right for a bright view. It's acceptable because it does not have GPS. I don't like a radio GPS because the radio location requires you take your eyes off the road to view the map. I prefer a GPS held above the dash where you can view the road at the same time. If I was using the unit as my GPS it would be a nuisance. You can still read the screen but the colors are not as bright off angle.

The PAC harness has to have its wires spliced into the Kenwood connector. Not difficult but you need to figure out which wires splice together. For $25 Crutchfield will do it for you. Worth the money in time saved.

Removed the stock Alpine unit in my 2017 Sprinter and replaced it with a Kenwood DDX396BT unit. Also replaced the door speakers with Kicker two-way speakers, removed the center dash speaker and the two tweeters in the corners of the front window. Added a Kicker tweeter in each A-pillar. Vast improvement! Did not connect the OEM mic but used the Kenwood mic and mounted it right above the radio in the tray. Phone listeners have told me that speaker phone mode is excellent quality. The Sprinter is an acoustically challenging vehicle due to the large area and hard surfaces, but the Kenwood unit has a LOT of functionality to alter the sound to suit the environment. A superior unit to the Pioneer Apple CarPlay unit I added to my old 2008 Sprinter. Better sound, simpler to operate, better user interface.

Used the PAC interface and bought the Crutchfield wiring adapter. Good advice! 25 bucks well spent! Thanks. All went smoothly, except that the input jack on the Kenwood deck that accepts the Sirius plug died after about a week. Crutchfield was excellent and shipped a replacement overnight at no charge!

Now to sell that old P.O.S. Alpine deck for cheap!

This is a timely subject because my recent Kenwood installation uses an external microphone -- and everybody complains they cannot hear me well. I will experiment with the settings, but I was even considering a headset to put on while making calls when driving. It's really the road noise that drowns everything out. As much as I try, I have not been able to contain much of it.
Here's an old saying I just made up:
"The older a man gets, the more clearly he remembers things... that never really happened."

I was thinking of doing the same thing then I came across this article. So I just need to locate the purple/gray wires from the factory harness and splice the mic input wire pair that's already plugged into my Kenwood DNX885RV double DIN unit. I wished that the PAC unit would have retained the phone pickup/hangup buttons but no big deal, just wondering if anyone is able to use those functions after they have replaced the head unit?
2016 RT SS (Short Sprinter) Agile with 200Ah Battleborn Lithium and 300W Solar.

This old article by Mitch was excellent and his research was timely for me.

I used positaps for the antenna power and sprinter mic, wired to a connector plug I added. 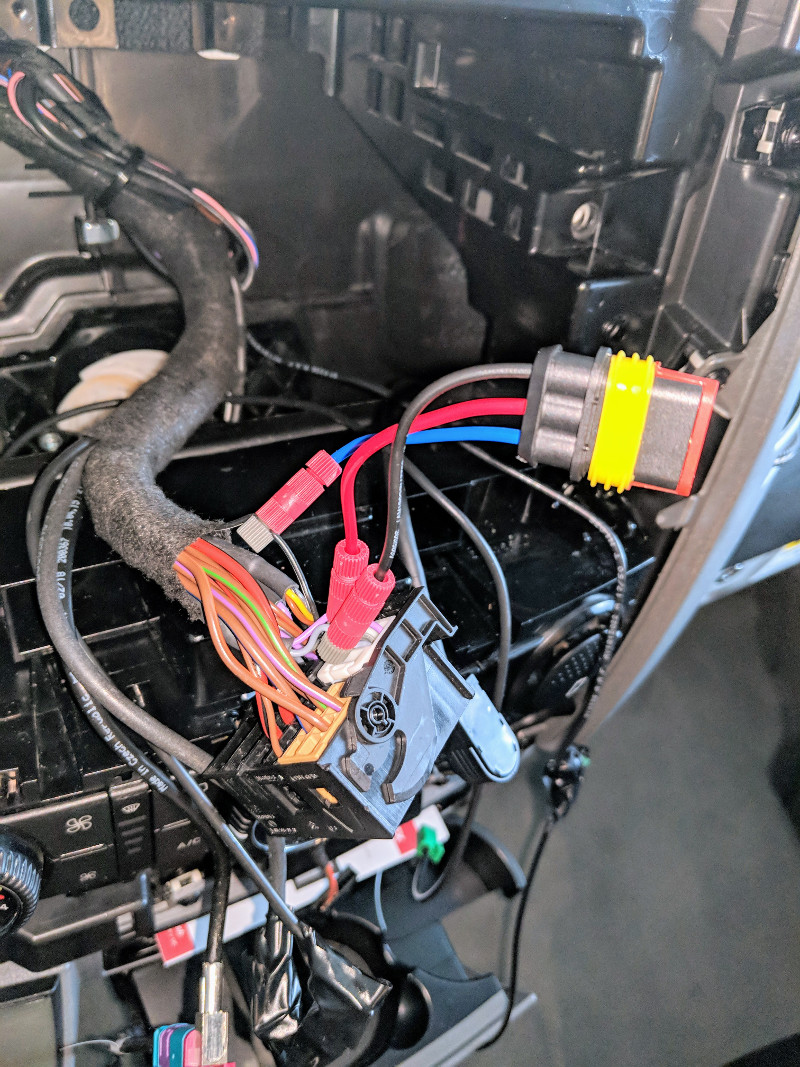 On my Pioneer AVIC-8500 though, the factory mic was distinctly under-performing for calls. It wasn't terrible, but experimenting with the mic that came with the Pioneer, callers told me the Pioneer mic was significantly better. So I ended up just hanging the Pioneer mic off the same location: 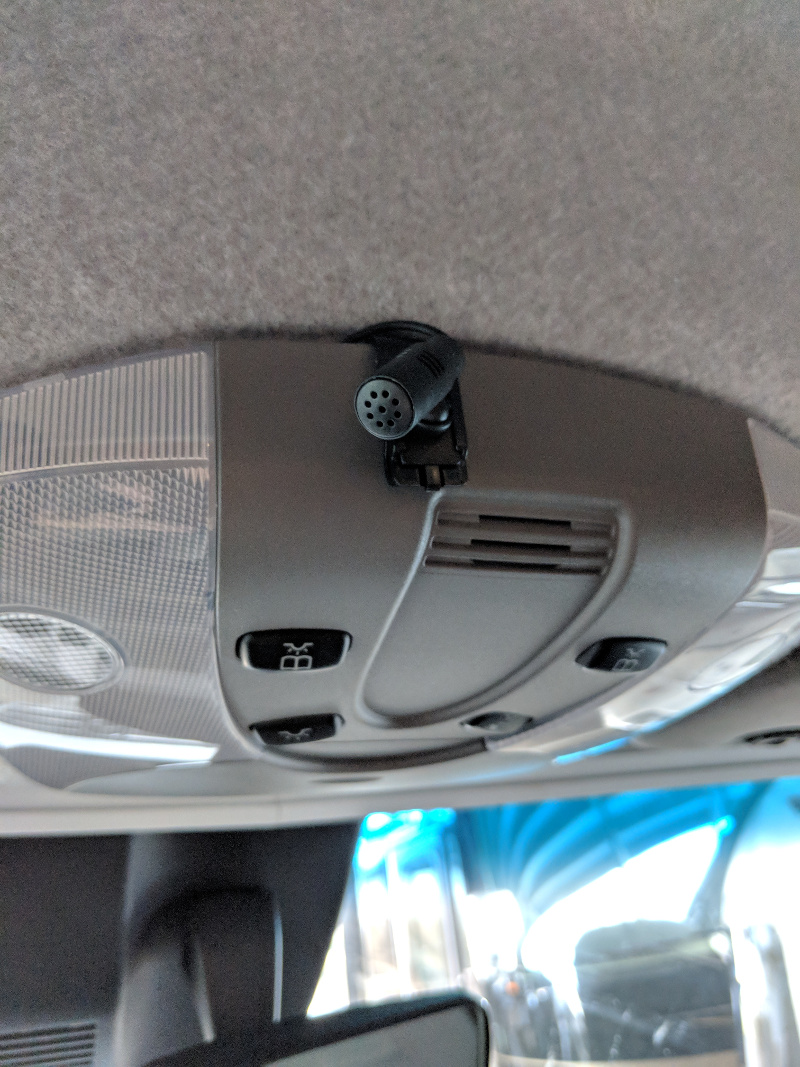 As far as the phone pickup/hangup buttons they don't work on my Pioneer. I never bothered to investigate if thats something I could program in my Metra Axxess ASWC-1 steering wheel interface or not.
2019 Unity CB (2018 Chassis)

I wound up splicing the purple/gray wire pair coming from the mic element on the overhead to my new Kenwood DNX885RV. At first, I just twisted the wires together and made a test call and the other party could not hear me. Then I took a leap of faith and soldered them together and made the test call again and it worked. I am considering not using the plug that came with the Kenwood mic and use a new connector and solder directly onto as there may be a minute impedance mismatch where the two different gauge wires meet. But overall, it works fine with factory mic on the overhead.
2016 RT SS (Short Sprinter) Agile with 200Ah Battleborn Lithium and 300W Solar.
You must log in or register to reply here.
Top Bottom