Since I want to document the changes I make to my new van, I thought I'd start a build thread.

The Goal: End up with an adventure rig for mountain biking and snowboarding.

So first off, some pictures..

After much research in the "Best Insulation Materials?! Help!" thread, I decided to go with Thinsulate, LowE and some Kilmat for additional sound deadening.. It arrived yesterday so I didn't waste any time getting started as I hope to finish all this over the weekend..

Looking forward to tagging along on your conversion, subscribed to the thread now, sorry to booger it up w/ my photos

I know it's a day late and a few dollars short - sorry... The wheel house (kilmatted tub in photo) has another slim clamshell piece on the outside of those stamped wall supports that bridges to the fender/wheel well -- Yes I know you'll have liners and insulation but on my Italian Vanborghini it was the outer wheelhouse sheetmetal that sprayed NOISE like a pressurewasher sprayed into an empty bucket, only to be found weeks later when I got someone else to drive whlie I snooped around... For a few dollars of kilmat and twenty minutes of your time layering over them goes a long way to hushing up highway noise. If not youse then sumbuddy else reading dis then...

Installed Kilmat on the ceiling and around the driver and passenger footwell this morning.

Finished up Kilmat, including the wheel well inside the “wall” and started with the thinsulate. Even with a brand new pair of fabric scissors I’ve been having a hard time cutting this stuff. Going to try a rotary fabric tool next..

veronatii said:
Even with a brand new pair of fabric scissors I’ve been having a hard time cutting this stuff.
Click to expand...

I decided to give another new pair of scissors a shot.. what a difference! Here's what I went with: https://www.amazon.com/Fiskars-9-Inch-Dressmaker-Shears/dp/B003YKVNQS

These electric rotary cutters work incredible on Thinsulate. Huge price range and you'll definitely notice a difference in quality, But the $65 2" works well on thinner thinsulate, and the 4" can cut multiple layers at once. I have them for my job, but was very happy to have them when doing insulation. About 10x (no joke) faster than scissors and your hands don't get as worked, and cuts are cleaner.

Got to chime back in --- doing the back doors, including outside shell sheet metal AND the stamped inner frame forms top and bottom hushed up a whole lot of sound 'pressure', that was not really identifiable noise but a being in a guitar or drum shell so any shock/shudder/oscillation got beamed up front into the cab area. I didn't count square footage but I managed to weigh the 45-pound box after each step, 10 pounds got my brand new RAM Promaster high-roof Van back doors closing Lexus quiet AND set up the door cavities as excellent speaker boxes.
___________________
2014 diesel Promaster 159" Window Wagon, June 2015

Installed a Maxxair 7500K Deluxe yesterday with the help of a friend. @hein's adapter made installation a breeze.. I'm really happy with how it turned out!

I installed the @flatlinevanco roof rack over the weekend. Installation was very quick and easy, even doing it solo. The only hangup was the cross bar in front of the fan had to be moved forward out of the original bolt holes since it would have hit the fan. Easy fix however.

Big weekend! The batteries and charging methods are installed and wired.

Two Fullriver 6v 224AH AGM batteries are mounted below the van in a @hein battery box and wired up underneath the drivers seat. A Kisae DC to DC charger provides power from the starter battery & alternator while the van is running. When parked, a Victron MPPT charges via the SunPower X21-335-BLK 335 Watt panel on the roof.

I really dig the getting it all into the seat base. I have no where near that much space...mine is pretty well full of MB stuff in there already ...
J

Thanks for posting your build!

The Kisae website shows their chargers can handle DC-DC charging and solar if you have the DMT models. Did you choose a separate solar charger for a reason? Did you have the factory Aux battery or did you just wire up the aux battery from scratch? I'm planning on a similar install, let me know how it is working out!

jenho said:
Thanks for posting your build!

The Kisae website shows their chargers can handle DC-DC charging and solar if you have the DMT models. Did you choose a separate solar charger for a reason? Did you have the factory Aux battery or did you just wire up the aux battery from scratch? I'm planning on a similar install, let me know how it is working out!

I used a separate MPPT because the Kisae charger has a DC input range of 10.5 - 32 volts and my panel runs around 57.3 volts. I would have just used a different panel, but I already had this one lined up from a friend.

I don't have the factory Aux batteries, so this was all from scratch. So far I've been very impressed with this setup. I haven't put a ton of load on it yet but when running a TV over a 500w inverter for a few hours the batteries never went below 100%.

Its been a bit since I posted updates on my build..

I only have time on the weekends for projects, so things are moving pretty slowly, but often with deadlines. 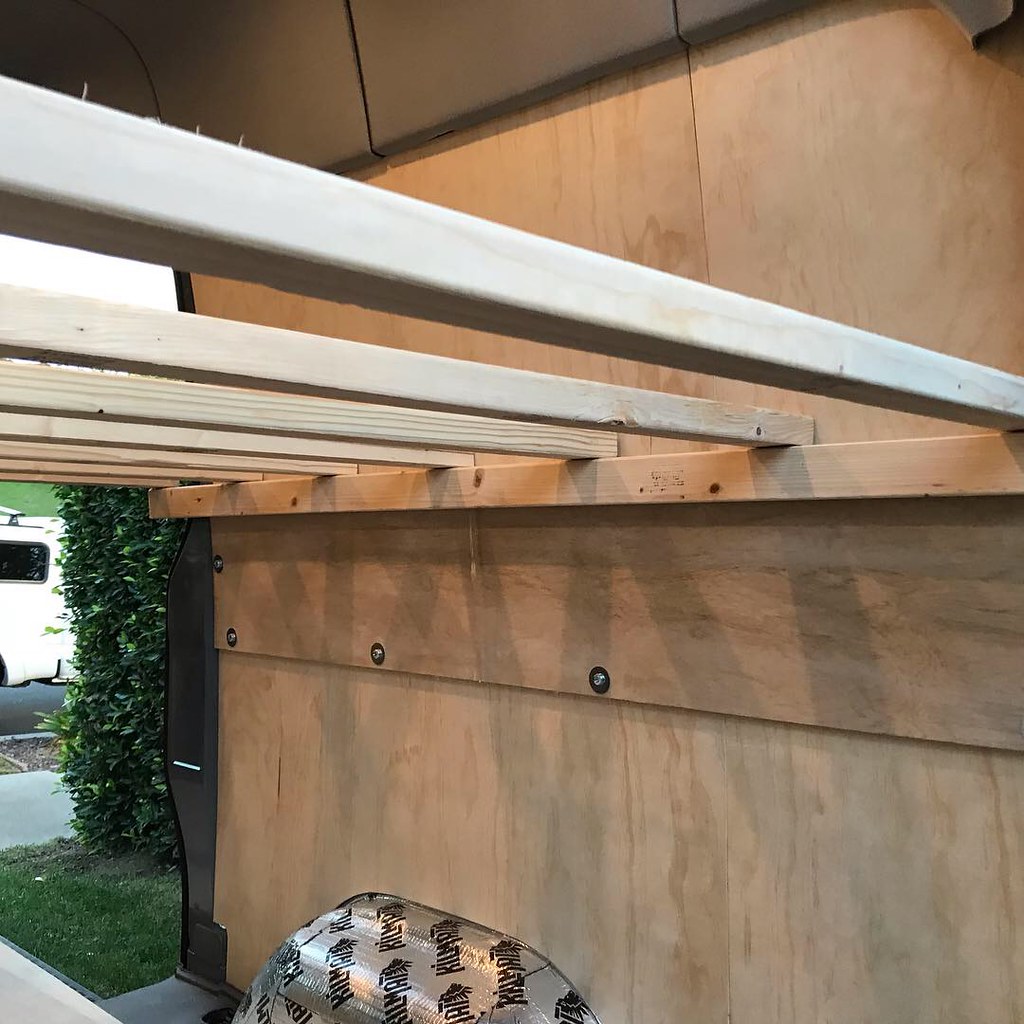 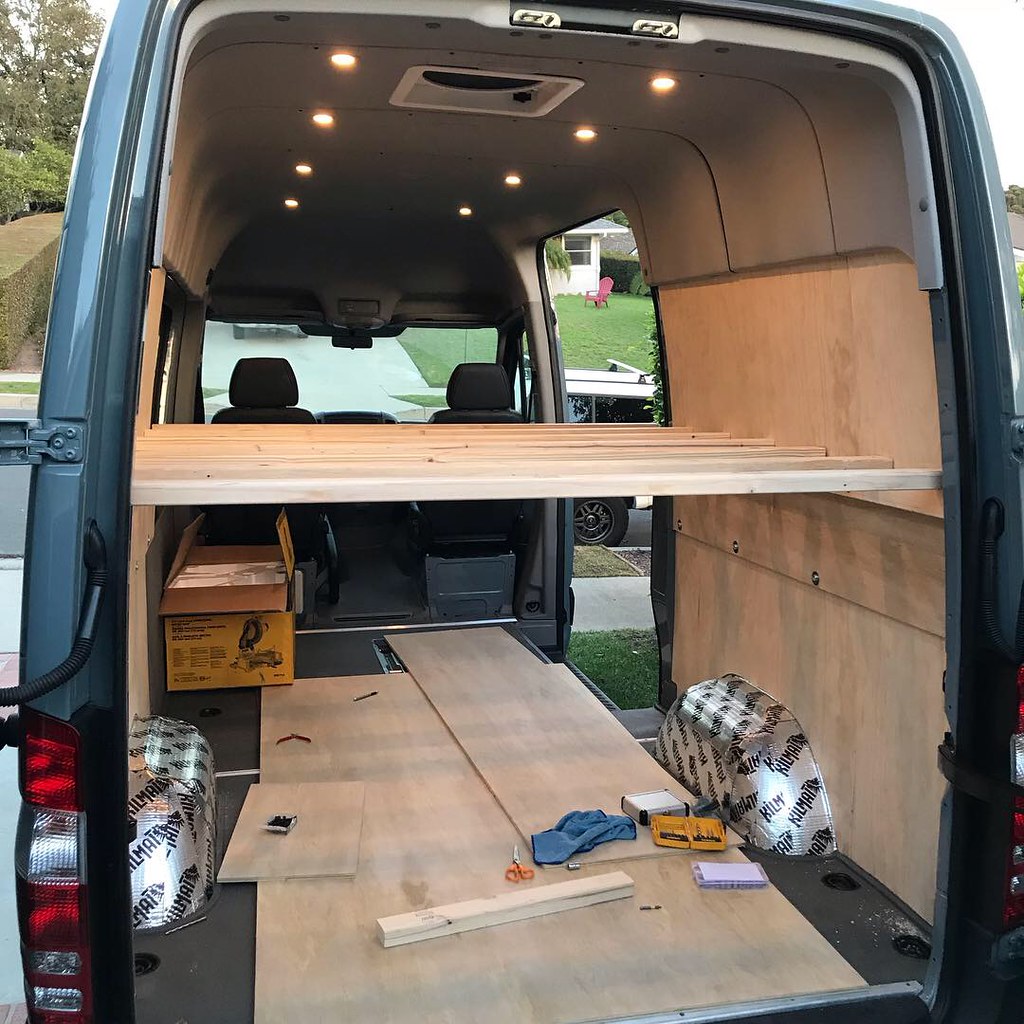 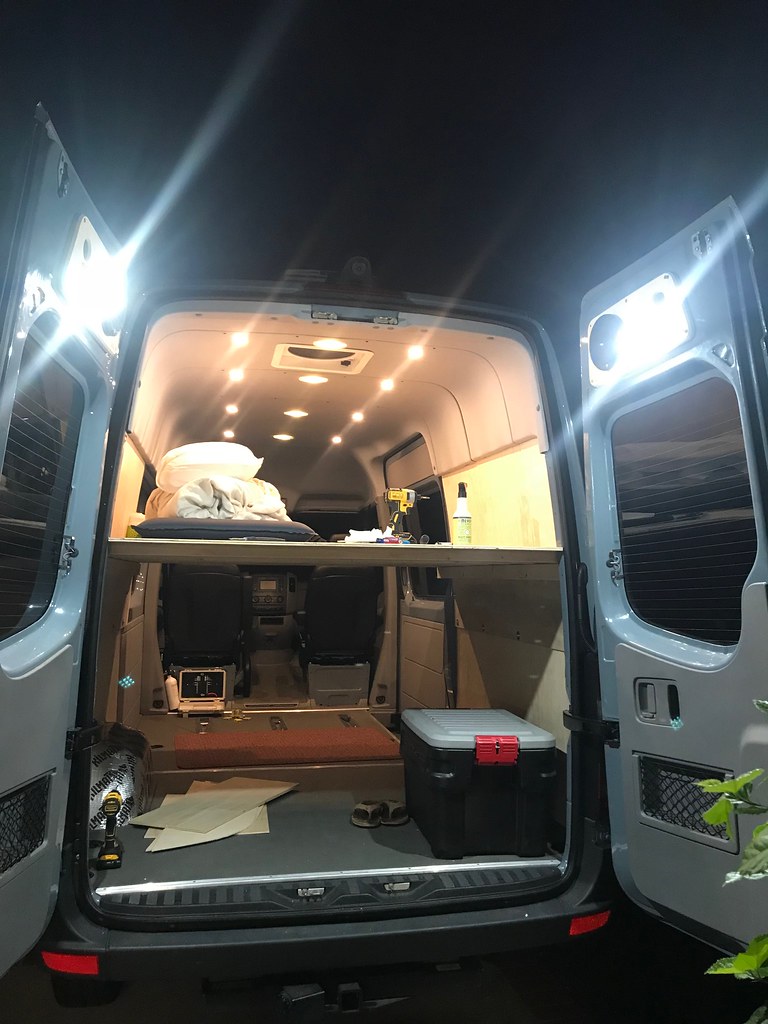 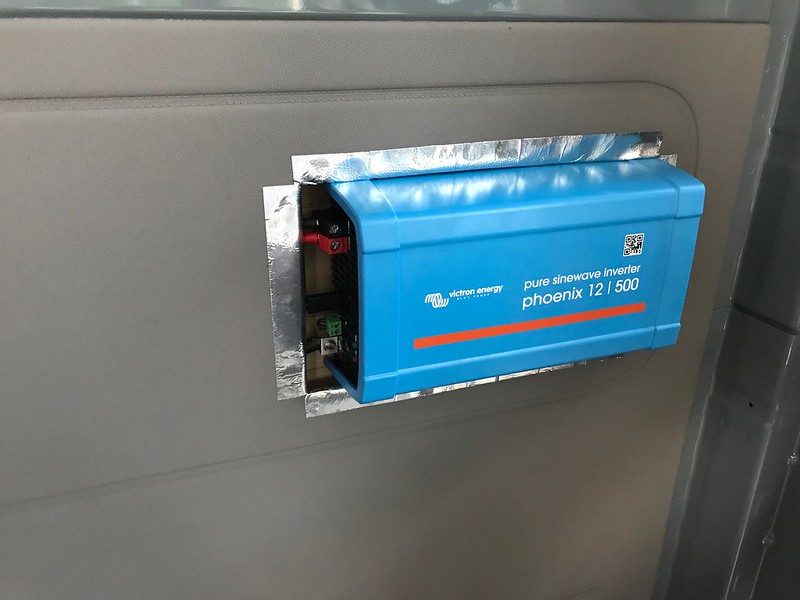 Bike & gear drawers
Todo: Paint, coin flooring, thru-bolt to chassis.. I was in a hurry to get these done before thanksgiving.. 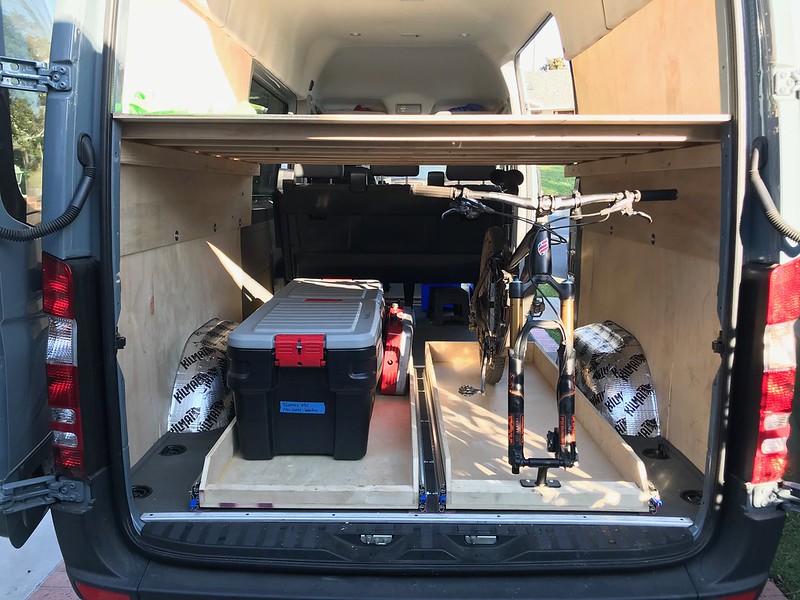 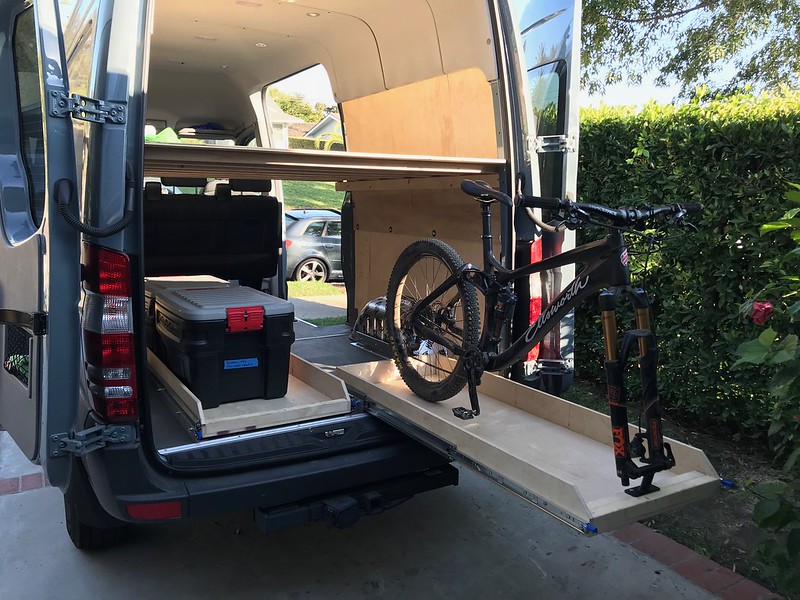 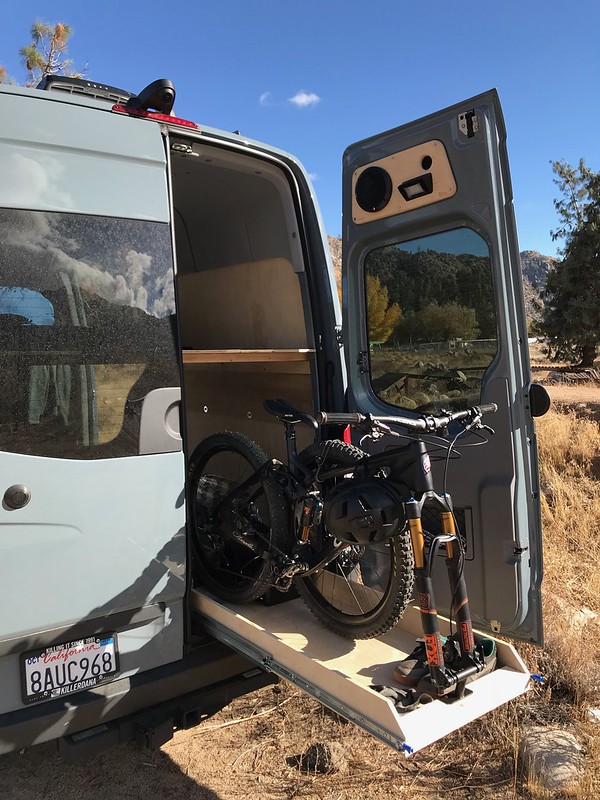 Most importantly, I got a chance to get out and use the van while on a Thanksgiving trip up to Kernville, CA. I am very happy with how she performed. 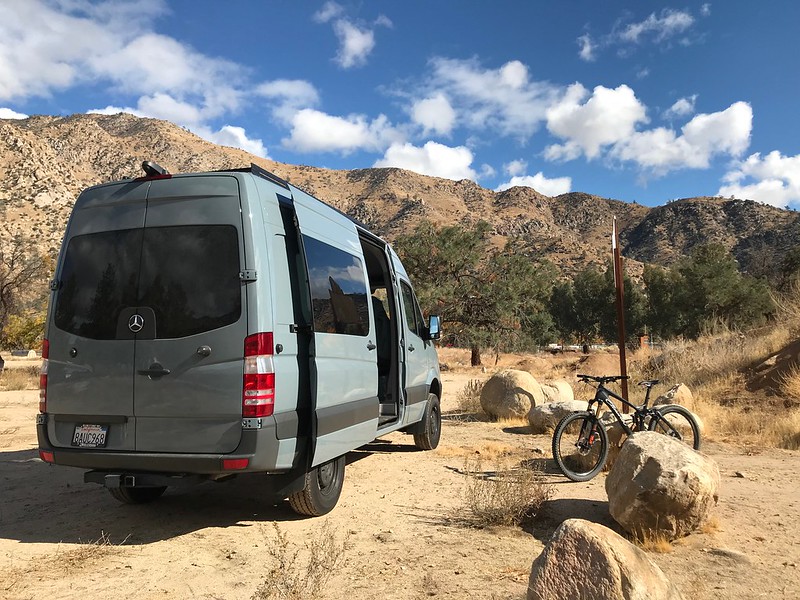 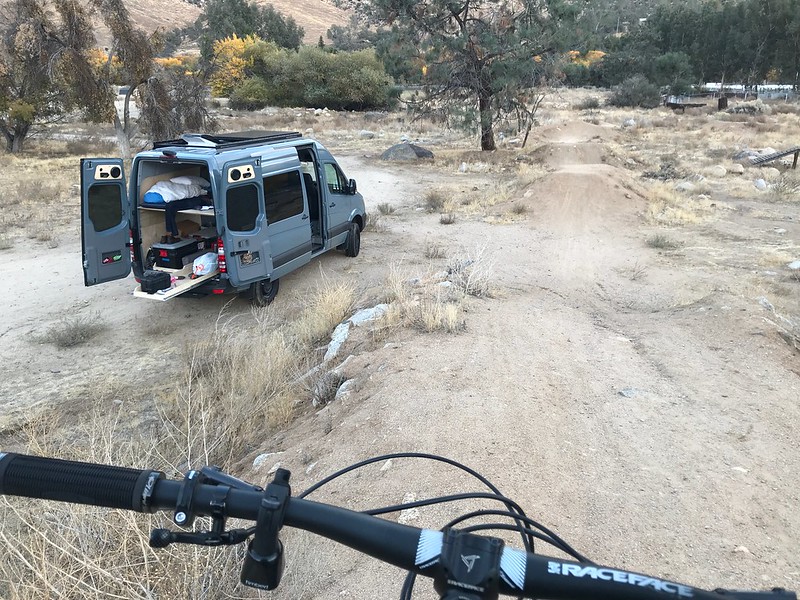 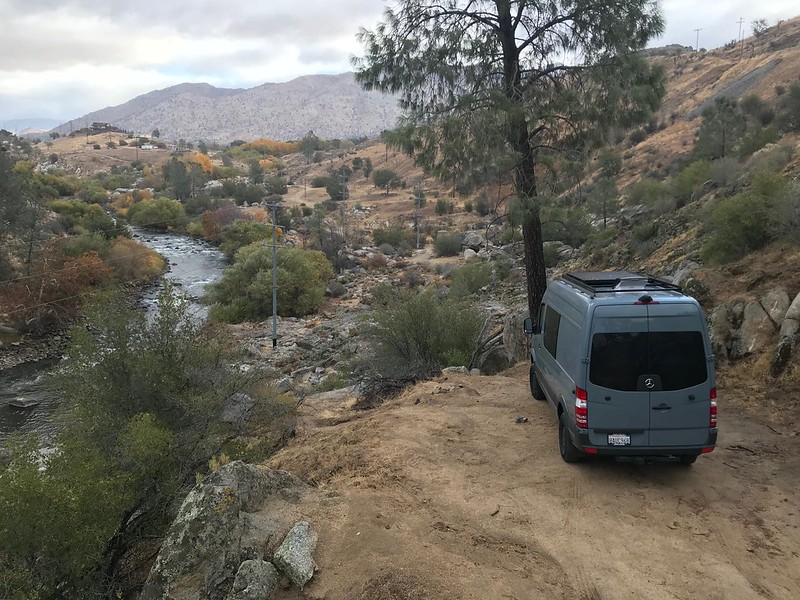 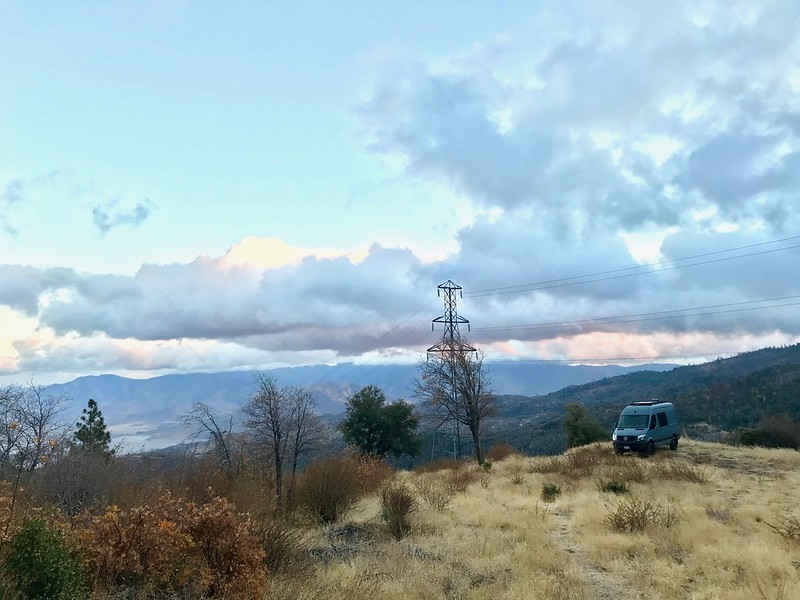 I plan on adding solar this winter.

More pics on my blog;
http://kitchenhui.com/road-trip/

Nice work @RVCuisineScene. I plan to put an Espar heater underneath the passenger seat..

Here are photos of my batteries and how the solar panel is attached to the FlatLine rack..

I recruited my Dad's help to install the Espar D2 heater on Saturday. All the mechanical stuff was pretty straight forward, but the lack of wiring diagrams and labels made the electrical portion kind of a drag. I spent a good hour or so trying to figure out what all of the wires were for, only to find out in the end that you really only need a handful of them.

The fuel pump was obvious, but I did have to find a diagram of which wire was which when assembling the connector. This turned out to be the answer: 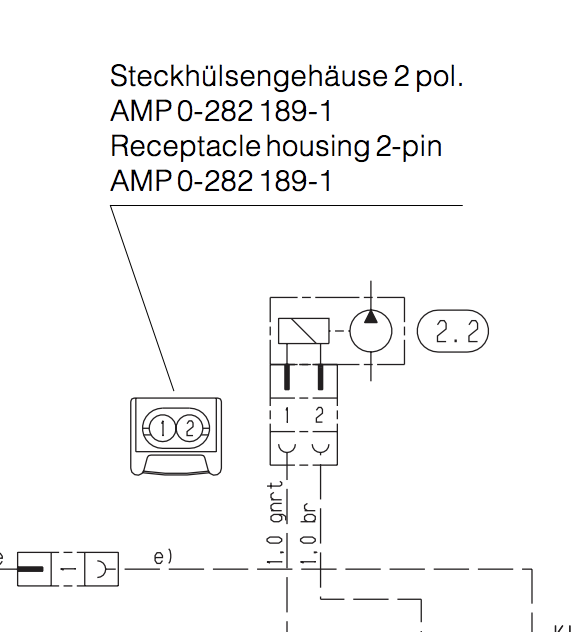 Next was the bundle of four wires where the large red & brown were obviously power/ground. I assumed the small red was power too, and after some googling was able to confirm that. I still have no idea what the fourth wire (red/white) does.. so its coiled neatly under the seat until I figure it out.

Next, I found this blog post that stating that the brown/white & gray/red get bridged to bypass the external temp sensor. Can anyone confirm that?

When wiring the controller, I discovered that the Easy Start Timer only needs three wires: red, brown and blue/white. So I'm assuming the rest of that bundle is for the high altitude kit that I ordered with the heater, but Heatso failed to include in my shipment.

In any case, we were able to get the heater fired up after priming the pump. Now I'm excited to test it in the cold weather!

Thanks for the build pictures. Don’t you love it when a plan comes together!! I’m getting all sorts of ideas from build outs like yours. Now if I could only find a 4x sprinter......
You must log in or register to reply here.
Top Bottom