For serious reflow work, you can use a hot-air pencil. For hand re-work of SMD stuff, solder paste and an application needle are pretty much required.

With a hot air pencil, you cover the surrounding components, and gently heat the PCB and chip, a pair of tweezers lifts it off once its flowed.

In a few desperate (and dirt poor) situations, I have reflowed otherwise junk boards in an oven. A digital thermometer and extreme care are needed, as even a slight bump will send components flying...
2004 T1N | Overland Conversion in Process Completed...For now... | 187,000 miles | 140" | High Roof | My Build Thread
Another Random Blog | http://VagariesAbound.blogspot.com

You might want to hold off until it fails again - and get a scrap mother board, DVD player from a thrift store etc. and see what it takes to lift some of the components off the board and maybe practice putting them back down a bit. Just go to town on some old piece of electronics with a PCB in it.
Click to expand...

I have an old Weller solder station which still works. Purchased used from Bell Aerospace back in the day. It's great to have and use.

Were I going to swap out a DIP chip at home I would consider using a Dremel tool with a small wheel to cut the chip lengthwise. From there the individual legs can be isolated and removed individually.

Form there use a solder sucker or braid to clean up the board.

For me installation is generally easier than the extraction.

vic
DAD NAS (N. Amer. Spec) 2004 140 2500 >330,000+ mi. Arctic Whitewash Brush-tone Grey
2006 Freightliner 140 2500HC >183,000+ mi. Arctic Whitewash (Spotted Snow Leopard accents)
"My opinion and worth everything you'll never pay for it." assumed.
Anyone can hold the helm when the sea is calm. Publilius Syrus
"There are only 10 types of people in the world: Those who understand binary, and those who don't." HaWiiLuVeR
16 ounces of unnecessary prevention can be worth a pound of manure.
T

It's dead now and hitting it with an untrained soldering hand will almost certainly make it worse if you are hitting components.
You can buy expensive equipment like a pre-heater and an air pencil but then again, practice is key.

You can do like the gamers do... remove everything removable, clean it well and reflow it in the oven at about 390*F.
Lots of write ups & videos, some failures but many successes.

Ummm. That might be a bit extreme. Especialy since the component is likely known and a fairly large power device at that.

Besides it's not irreplaceable - hardly worth that much effort.
Last edited: Jun 25, 2018
S

I wouldn’t recommend adding solder but definitely add rosin flux - get a syringe or flux pen and add to each solder joint and heat up w soldering iron until it gets shiny and fully molten , and let it cool. Since it’s a substantial power component it might take quite a bit of heat to get it to reflow properly. If the solder starts looking crystalline from reworking it too much just add more flux. One pin at a time, including the tab, and you should be good! Glad you got it figured out!
M

Here's what it ended up looking like with the clear cover and silicon: 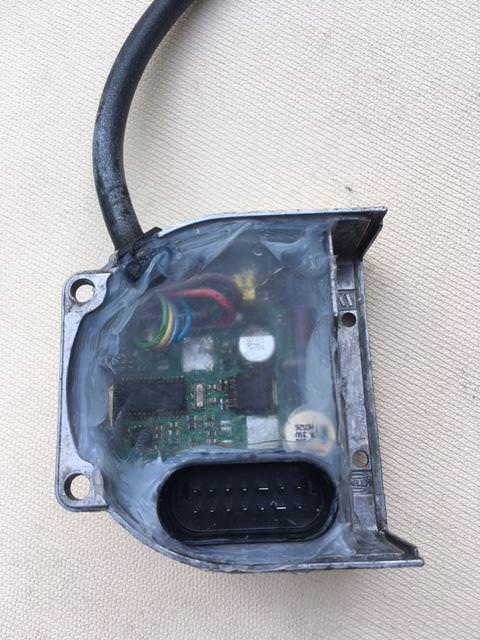 I did not end up re-soldering, decided to see how long it runs for as-is because I'm curious. At some point I will try messing with the spare controller that was showing the same symptoms. Over and out for now..
2006 Hi Top Window Van 140"
R

I recently got hold of some hydronic d5's cheaply. They are working so I don't have a problem with the conrollers like you had.

But in looking at the controllers I was struck by how "squishy" the potting rubber was. If your fan problem was just a solder break on a chip and if this is a consistent failure (like the inductors falling off the ThinkPad motherboards I mentioned) - then it occurred to me that a good diagnostic test might be to firmly compress/pinch the potting compound above the problem chip (#2).

This may cause it to re-make connection and function again. You'd then have your answer as to what you need to do to fix the problem.

Worth an experiment on your other dead unit?
M

Thanks for doing this work. I have 2x Espars that are exhibiting this problem. The blowers don't start but they sometimes do start if you tap the espar with a small hammer, or drive over bumpy roads.

I just assumed it was the brushes in the blower motor that were bad. But upon disassembly, I found that the brushes were almost brand new. So now I will be digging out the potting compound and reflowing that IC. Thanks again for showing me the way.

A year later, I had inconsistent fan operation, usually not working. Took it apart again and found some condensation had gotten into my silicon and plexiglass job. 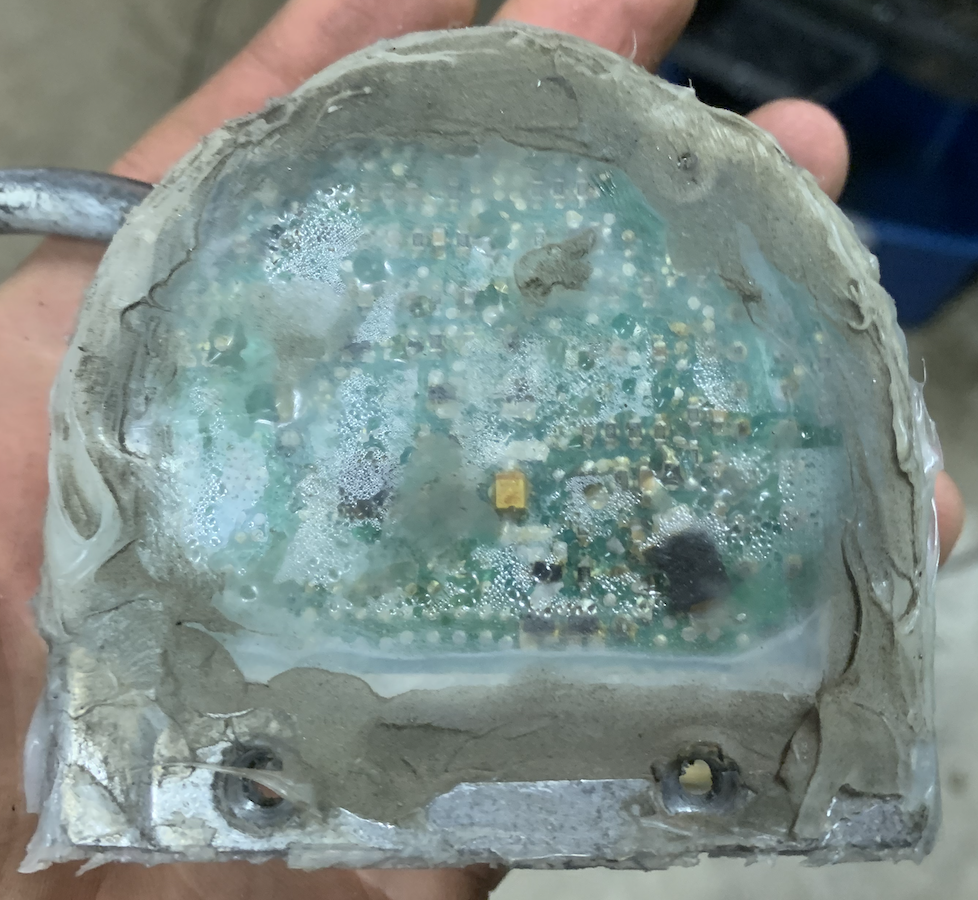 I didn't do anything differently this time as far as sealing, so eventually it's probably going to fail from water related issues. Hopefully not soon. I'm afraid to fully pot it because of the mess and the uncertainty of the fix.

Before re-melting and adding a bit of solder to the fan transistor (only way to get more flux was to add solder, as I didn't have any separate flux on hand): 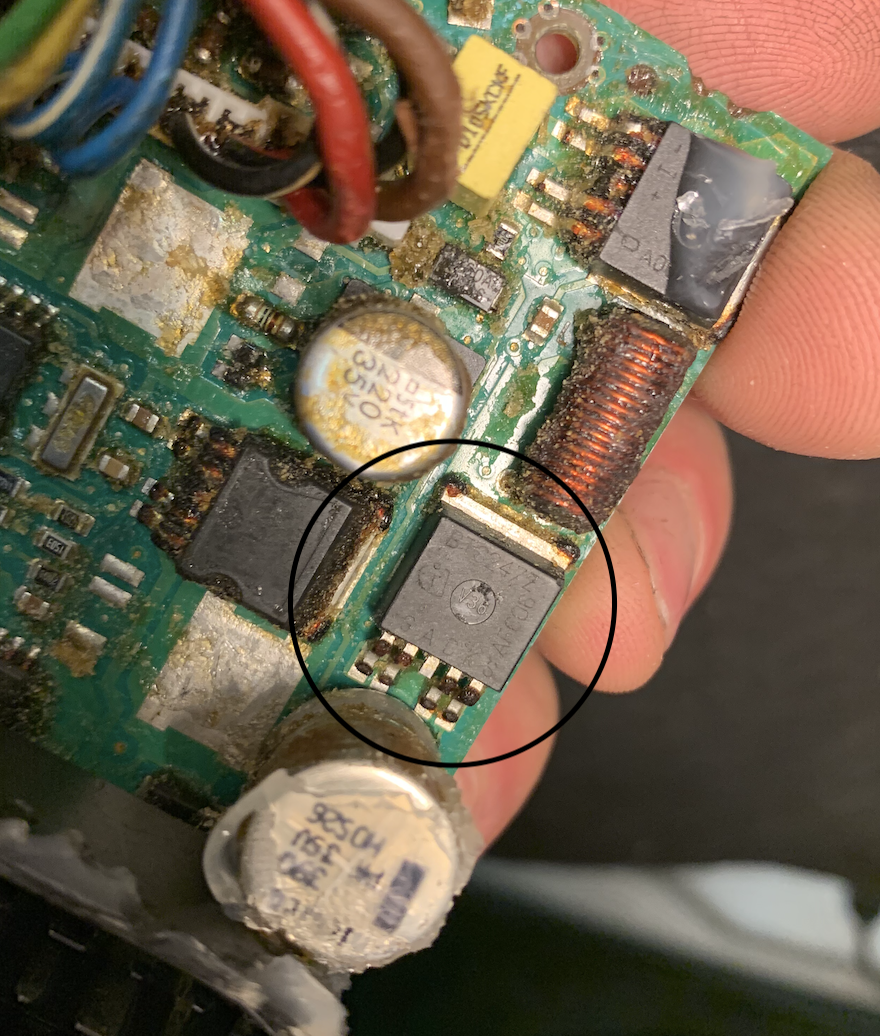 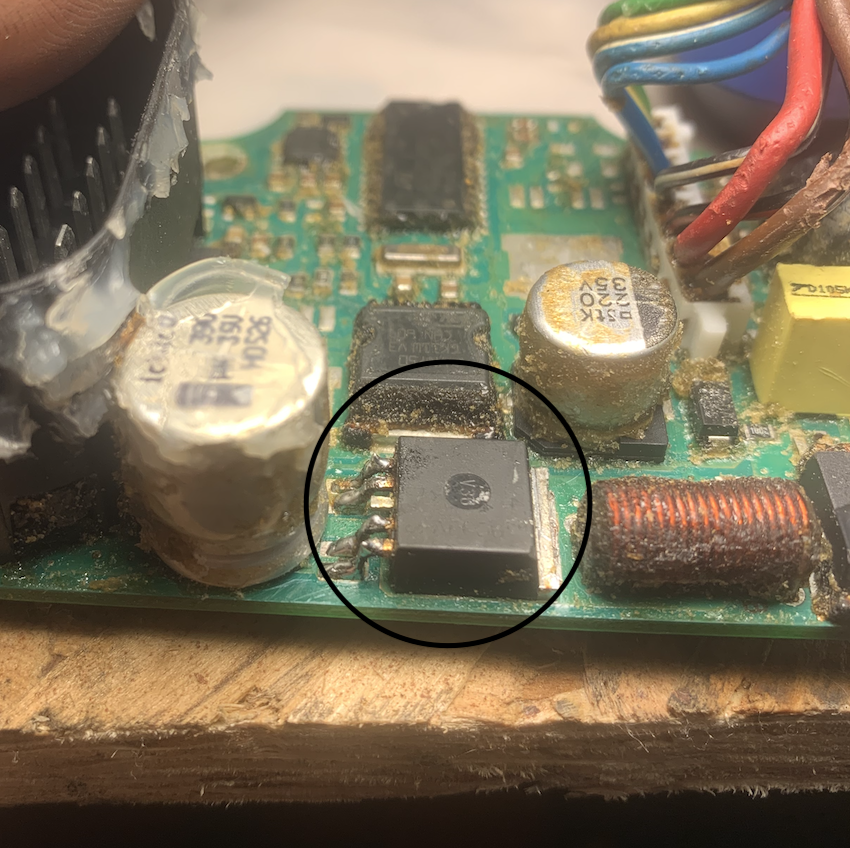 So far, fixed again, but I'll post again if the issue returns

It's dead again! I'm waving the white flag, it was fun to troubleshoot but now I want it to work. In looking for a replacement ECU, I came across this one
https://heaters4you.com/eberspacher...001.html?search_query=control+unit&results=66

Advertised for Mercedes Vito, not Sprinter, but it is a D5WZ. Anyone know if that would work? I'll do some calling around tomorrow.
2006 Hi Top Window Van 140"

markxengineering said:
It's dead again! I'm waving the white flag, it was fun to troubleshoot but now I want it to work. In looking for a replacement ECU, I came across this one
https://heaters4you.com/eberspacher...001.html?search_query=control+unit&results=66

Advertised for Mercedes Vito, not Sprinter, but it is a D5WZ. Anyone know if that would work? I'll do some calling around tomorrow.
Click to expand... 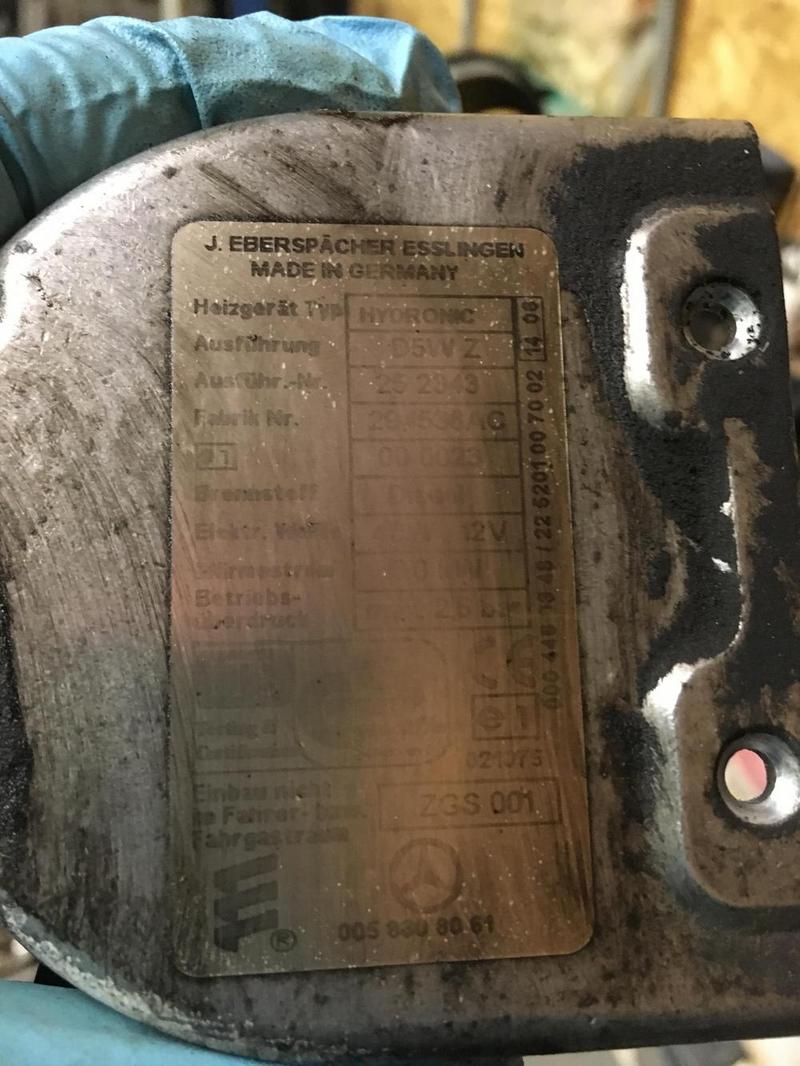 by the looks of all the funky schtuff all over the board
(esp the black spot under the plastic coating in the pic above)?

it's nuts to try fix this thing, unless spending countless hours (out in the cold) trying to fix mass-produced electronic junk is what floats yet boat?

and with the REST modification, so can use it as an engine preheater, she's been working like a charm!

me: marine electrical, refrigeration & corrosion specialist (ABYC certs), off-grid power/refrig consulting 25+years
(and with the sprinter, now re-learning everything i ever knew about vehicles
M

The repair effort was worth the it to me because of the learning. But that's a good price on a new one. Unfortunately the shipping date is 10 days away and I'm trying to hit the road, but I still might go for it if nothing else surfaces.
2006 Hi Top Window Van 140"
O

just have em ship it to one of your destinations that you'll be at for a few days.
it's a pretty easy+straight-forward R&R (an hour or so), but might want to also get some (a foot) of the exhaust hose:
http://www.lubricationspecialist.com/exhaust-components/24mm-2-layer-flexible-exhaust-per-foot/
couldnt get mine to let go (was welded), so just cut it off and replaced it.

and... in anticipation of the R&R on the road, you could also remove the existing unit, use an insert(barbed) connector to connect the hoses, so ya dont have to do anything but do the install, once arrive at the place where the new one will be waiting for you?
my rig: 2006(dodge)2500/140wb/hitop

me: marine electrical, refrigeration & corrosion specialist (ABYC certs), off-grid power/refrig consulting 25+years
(and with the sprinter, now re-learning everything i ever knew about vehicles
R

Did you verify the fan by trying to run off 6ish volts directly. It may be your brushes are wearing out and your ECU is just fine. If replacing just ECU then you may still be in the same boat.
M

Yes, I verified that the transistor mentioned earlier in the thread is the issue- it always gets a signal in but only sends power out the the fan some of the time. Fan was always fine when powered by a battery.
2006 Hi Top Window Van 140"
O

like i mentioned above, with all that 'stuff' thats all over the components on the board, any of it could be causing all sorts of 'semi-conducting' problems, on the micro electronic/integrated circuits (at 5vdc or less)?

me: marine electrical, refrigeration & corrosion specialist (ABYC certs), off-grid power/refrig consulting 25+years
(and with the sprinter, now re-learning everything i ever knew about vehicles
M

Tangentially related, but doesn't the ATC just send a 12V+ "On" signal to the heater? If so, It may be worthwhile just fitting one of the chinese coolant heaters. Last I checked they are something like 300$ on the web, and should retrofit fairly easily.
2004 T1N | Overland Conversion in Process Completed...For now... | 187,000 miles | 140" | High Roof | My Build Thread
Another Random Blog | http://VagariesAbound.blogspot.com
You must log in or register to reply here.
Share:
Facebook Twitter Reddit Pinterest Tumblr WhatsApp Email Link
Top Bottom