Somewhere in the 2010-2011 timeframe Mercedes changed the design of the Spinter outside mirror, which can lead to great confusion where trying to replace all or part of the mirror. The info here is the result of replacing the passenger side extended arm mirror on a 2008 Dodge Sprinter cutaway cab chassis. Before the design change, the entire old design mirror assembly was offered as a single part under Dodge part number 68009976AA and Mercedes part number A9068108716. If you go to a Dodge parts counter now with that number, you'll find that it was superseded by another part number, which in turn was again superseded. At the Mercedes part counter, it's still a good part number, just that there's no stock worldwide, and no estimated availability date. The new design mirror is not offered as a complete assembly. In the Dodge parts catalog it's virtually impossible to figure out what parts make up a complete mirror assembly, and my parts guy went through several support layers at the factory to be able to figure it out. All of the part numbers and list prices in this writeup are for Dodge distributed parts, current as of February 2018, and are for the passenger side extended arm mirror.

Comparison of old and new designs: The outside appearance is identical except that the old design had a flat upper mirror, while on the new design it's convex, plus the plastic trim surrounding the new lower mirror is slightly wider than on the old. The folding extended arm appears to be unchanged except for the motor connector on the electrical cable that runs through it. The black plastic parts visible from the outside and the blinker appear to be identical. The frame inside the mirror head, positioning motor, and both glass pieces are substantially changed. Comparing the two, it has the appearance that the new design is a cost reduced version, and that the old design is more mechanically robust. A side effect of the change is that the glass removal process is different. With the new design the glass pieces are removed by pulling them off instead of sliding them off with the old design. Using the old technique on the new design, or vice-versa, will lead to breaking the glass. In the old design the positioning motor was held to the internal frame with 4 screws, in the new design the motor just snaps into the frame. It appears to me that the old mirror head internal plastic frame could be transferred to the new folding arm, or vice-versa, but the positioning motor connectors are different and the wiring would have to be cut and spliced to move the connector.

For the new design, a complete mirror assembly is composed of the following parts:

I reused #4, #7, and #8 from the old mirror, and beleive I could have reused #2. #1 and #3 were broken and the reason for replacement. The new design lower mirror glass has a heating element, but the wiring harness does not have a connector for it. There are aftermarket complete mirror assemblies available in the $200 ballpark. The ones I found are TYC 8420141, and CH1321369 from several manufacturers. When picking an aftermarket mirror you need to be careful to select a model with the positioning motor and heated glass, as some of the ads are ambiguous and/or misleading on this. If anybody on the forum has bought an aftermarket mirror it would be nice to get a report on the quality, fit and finish, etc. I consider the new design to be a step down from the original. Besides the appearance of the internal frame being flimsier, when mounting the upper mirror glass it's difficult to determine if all 4 of the plastic snap retainers are engaged, and I think there's a distinct chance the mirror glass will break when trying to remove it. Compared to this new design I think there's at least a chance that the aftermarket mirrors are just as good as OEM. I'd have to see one to know for sure.

there also seems to have been a change between a single connector for motors heater and indicator, and two connectors - one for heater and motor, one only for indicator. farnell sell the pin inserts for the connectors, but the connector shells are a custom MB part.
2000 W-reg T1N Sprinter - Manuale - Double sliding door campervan
http://www.hughe.co.uk

I’m curious about the quality of the aftermarket ones as well; I carry my windsurfer and kayak on a custom side rack, and it would be nice to have the extended arm on the driver’s side to peer out a little more. Telescoping mounts would be the bees knees, but I can deal with the longer one all the time as well... 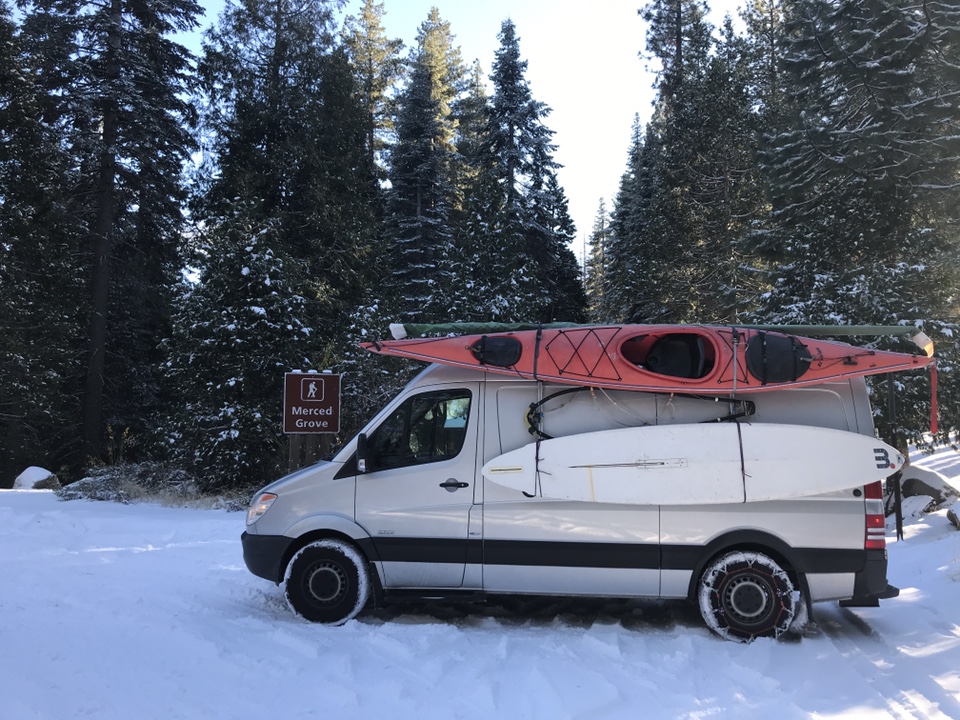 Sent from my iPhone using Tapatalk

GSWatson said:
...; I carry my windsurfer and kayak on a custom side rack,...
Click to expand...

What is wrong with this picture?

--dick (insert "Brrr" icon)
2005 T1N 118" Freightliner 2500 Passenger Wagon (2.7L, 15" tires, standard (short) roof)
Get YOUR Sprinter's full configuration datacard by entering your VIN to https://www.datamb.com/
http://diysprinter.co.uk/reference <-- lots of service documentation, Thanks to Jens Moller and Arnie_Oli
((as always: this post may go through a couple of post-posting edits... so maybe give it ten minutes before commenting))

autostaretx said:
... and park on snow.

What is wrong with this picture? 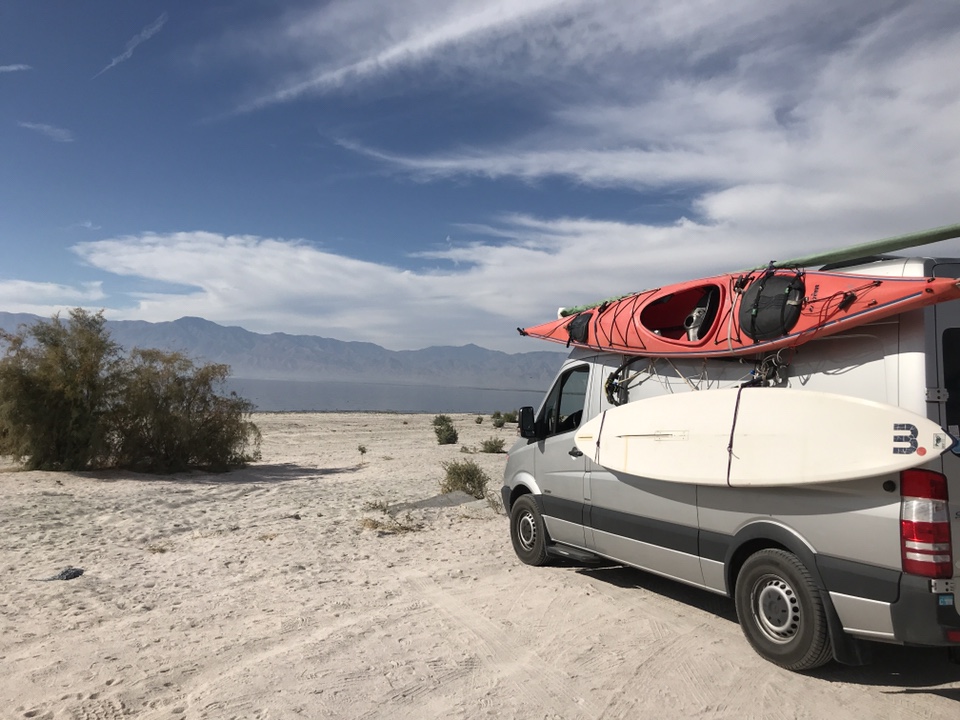 Sent from my iPhone using Tapatalk

Ahhh... they're just for decoration! (and the neat howling sound the kayak's cockpit makes as you're driving along)

--dick (whose kayaks on the roof of his 1965 VW Squareback made nice "rocket pods" for additional storage)
2005 T1N 118" Freightliner 2500 Passenger Wagon (2.7L, 15" tires, standard (short) roof)
Get YOUR Sprinter's full configuration datacard by entering your VIN to https://www.datamb.com/
http://diysprinter.co.uk/reference <-- lots of service documentation, Thanks to Jens Moller and Arnie_Oli
((as always: this post may go through a couple of post-posting edits... so maybe give it ten minutes before commenting))

autostaretx said:
Ahhh... they're just for decoration! (and the neat howling sound the kayak's cockpit makes as you're driving along)

--dick (whose kayaks on the roof of his 1965 VW Squareback made nice "rocket pods" for additional storage)
Click to expand...

Actually, they’re pretty quiet, even with the windows down.


Sent from my iPhone using Tapatalk

On a more serious note, I was just looking at my mirror from the driver seat, and from where I sit, there’s not a whole bunch of visibility left if the mirror moves out any further. Do the extended ones lean forward a bit more? 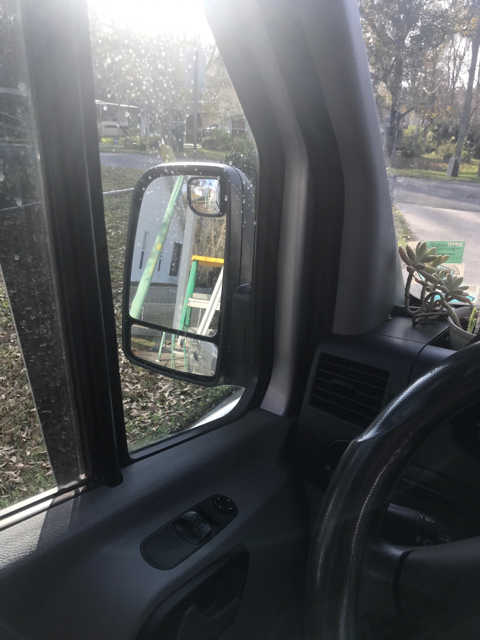 , so it’s not like I’m sitting in an unusual way forward position.


Sent from my iPhone using Tapatalk

Here’s an excellent video showing how to remove (and replace) the mirrors on the new design.

It and tigerwillow1’s post were a godsend for me.
Last edited: Feb 17, 2019
You must log in or register to reply here.
Top Bottom