Went there this spring for a glow plug sensor and B service. They called when ready, asked how much. Don't remember exact, it was about a grand. Told him there was a coupon for $200 on the dash. Got there to pick it up and miraculously the price had gone up $200!! Argued it, had no proof cause didn't have paper copy of what I was told over the phone. Not impressed, helluva way to do buisiness!
S

Scheduled a DOT inspection, quote to replace the rear brakes and replace the seal on the transmission. I'm local, 15 min drive away. Dropped off on a Monday and they started working on it Wed. They only had one of the rotors in stock and said I really should just do a full transmission flush, new filter, seal etc. Brakes will make it down and back ok. Agreed to inspection and transmission service. They serviced the transmission, new seals, fixed a muffler clamp, inspection and a few other items. It wasn't cheap, but in my mind worth it (I park on a gravel pad and can only do certain service items, like replacing the battery tray, coach fixes and other small items, oil changes, etc. I also keep my 2002 Audi S6 Avant and 06 MINI Cooper S serviced, so I'm tapped out with fixing cars, keep it limited).

We left to drive to the Cape the following day, 26 miles down interstate 89 the engine was surging on and off and on? Under full throttle boost it didn't surge, but part throttle it did - transmission felt fine, all gears shifted as normal. It was making a funny louder than normal sound while on boost too? This was my first long drive and it never did this, we didn't know what it was. Anyway, called the service manager and told him, he didn't know either. We decided to turn around and drive it back, possibly with their servicing? He said, yes drive back and we will look at it right away.

On the last long grade (French Hill in Richmond, VT) up towards the rest stop on 89, normally a fourth gear (or third) full throttle hill a big "poof" then the surging stopped, funny noise stopped and viola so did the power! I thought, great limp home mode (LHM) and fuel supply cut, blown turbo, hose or something.

Got there ok, talked directly with the tech, total gear head. As soon as I explained the symptoms, he knew exactly what it was, the turbo intake noise dampener ("shock absorber"). Totally blown out seam on the original Mercedes-Benz unit with 66,800k miles. Thanks to the Sprinter-Source and all my reading, I luckily had a spare Dorman unit in the camper! It took the tech 0.6 hr to hook up the Star unit and read codes, reset and install the new part. Yes, they had two in stock on the shelf, but we were only charged $75 labor and sent us on our way. Basically, they really helped us out in a pinch.

Notes:
While talking with the service manager in four to five weeks, they are expanding and making a full dedicated building just for Sprinters. Clearly this is THE place to get them serviced locally or in northern New England, this place is HUGE. There were many Sprinters in for service from all around including Quebec and a fellow full-time camper (South Dakota plates) in a Unity hauling a toad MINI Cooper waiting for service, who they let camp in the back lot.

I inquired if they had come across any recall on my dashboard brake light. No recalls noted, responded with being a Freightliner dealer, their computer system doesn't communicate with Diamler/Dodge recalls. Works with Mercedes-Benz and Freightliner, but not Dodge.

We left a few hours later and I drove our 416CDI like a scalded cat down to the Cape, 17.9 mpgs down and 18.07 mpgs back home, never skipped a beat. Love this thing! 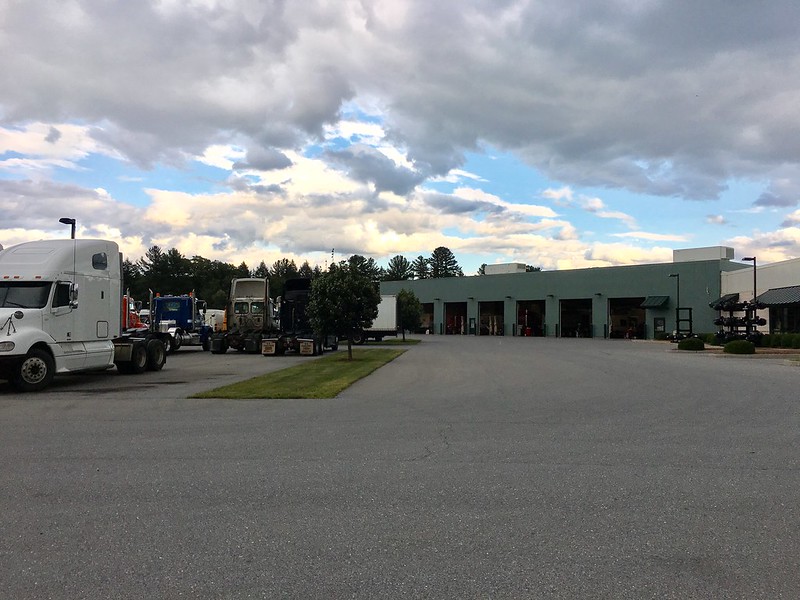 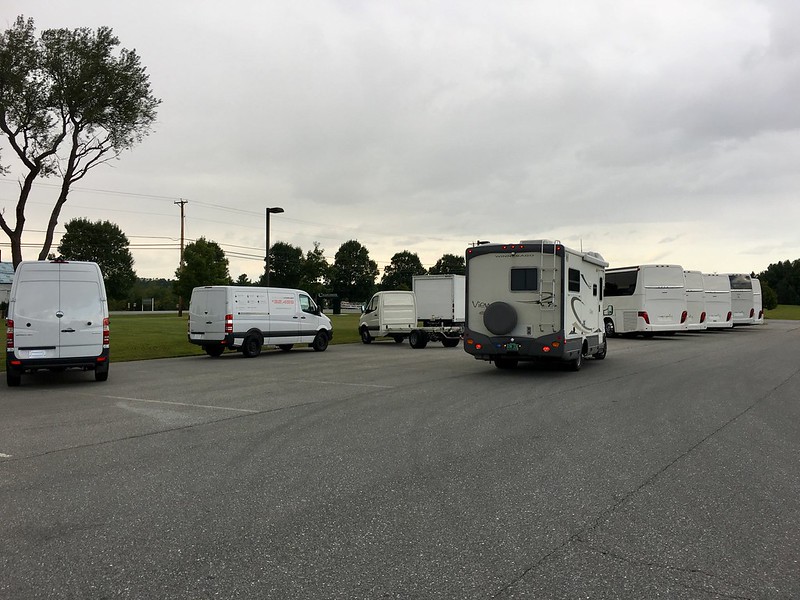 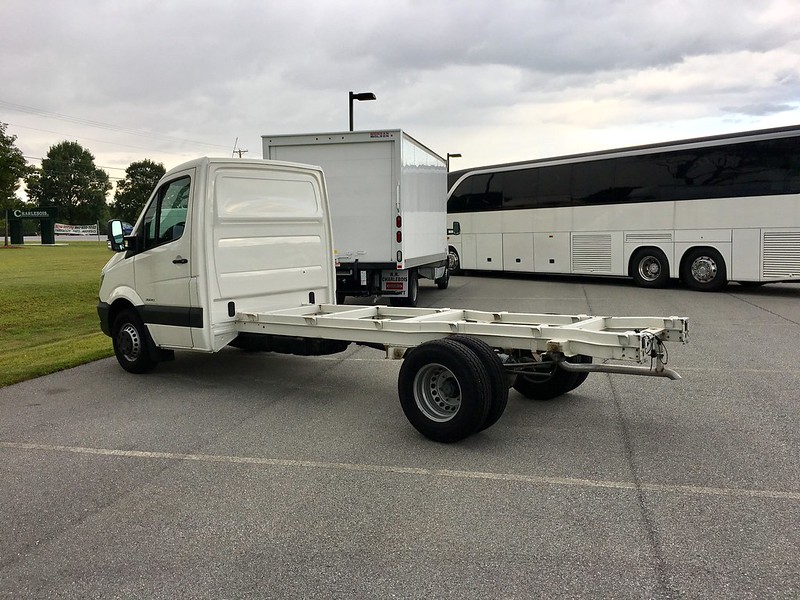 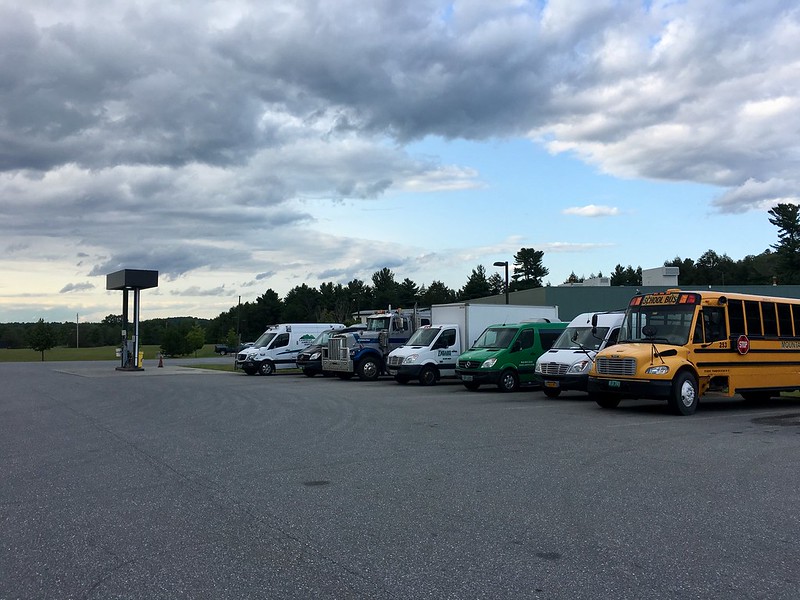 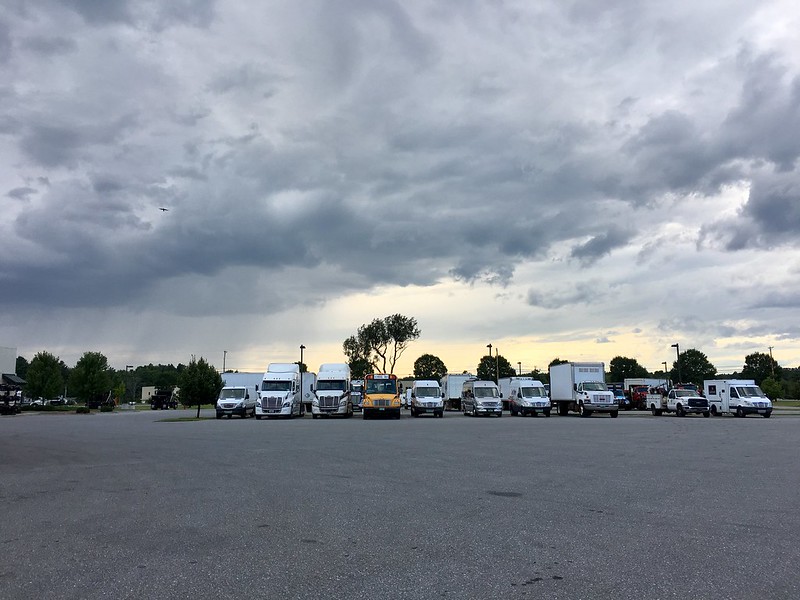 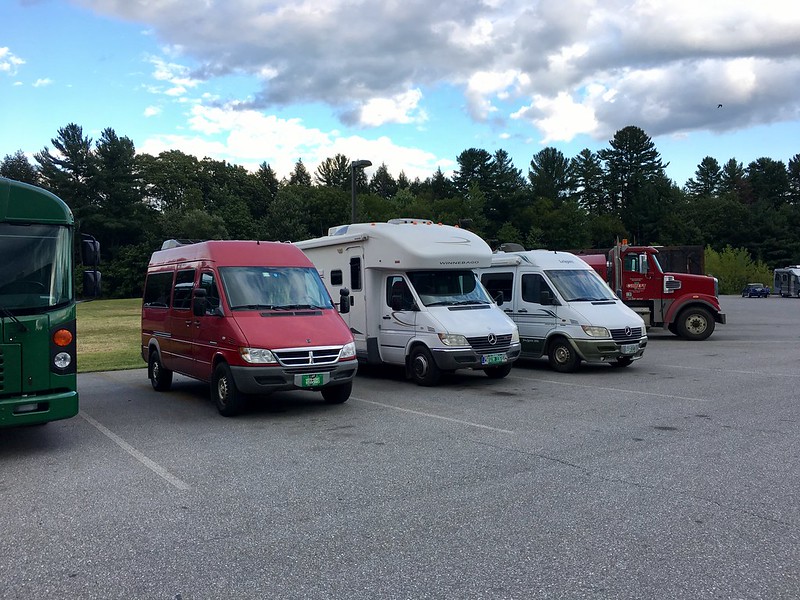 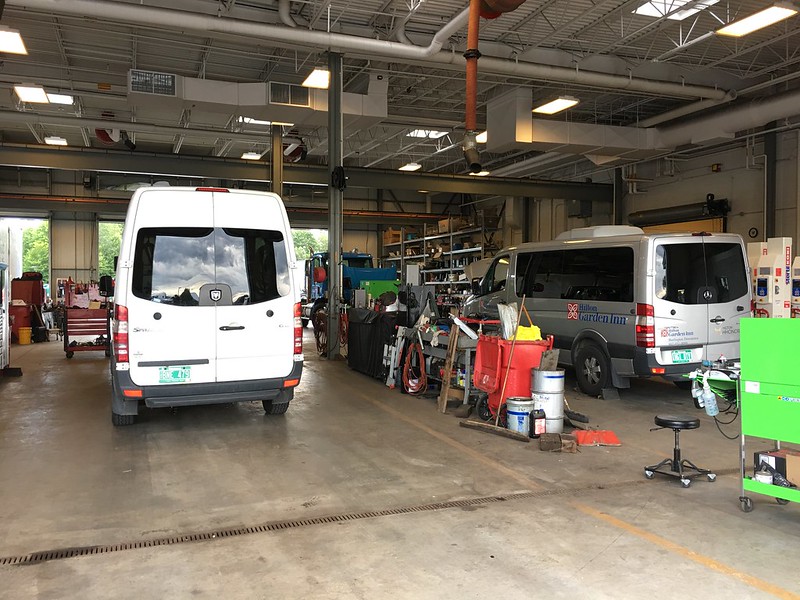 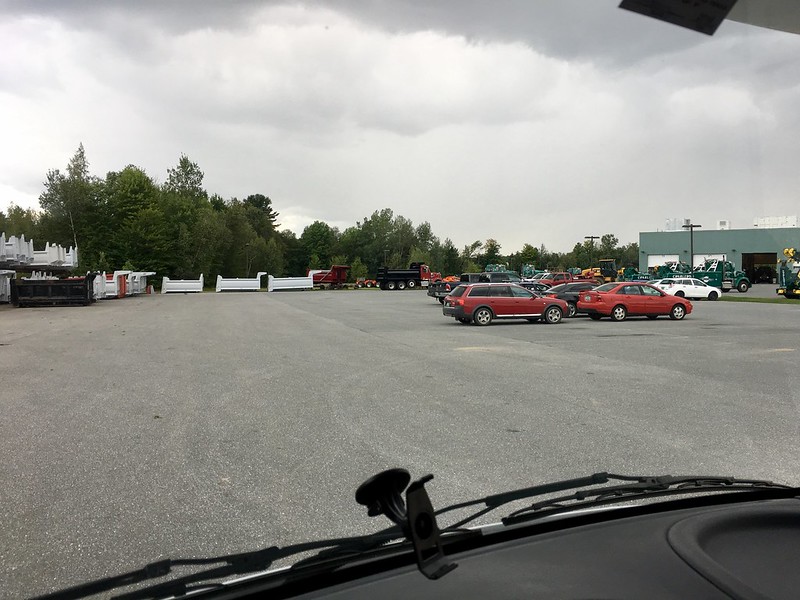 The RV to the right looks like one I looked at buying last year, but she had an attachment to
it and decided to keep it. I noticed that it wasn't there anymore. Thought she'd sold it but maybe
she's going to have it repaired.
It was sunk into the lawn in her back yard and the brakes were seised and all kinds of lights
were on the dash. The plumbing wasn't drained and had burst pipes. Also looked like mice had moved in.
As for Charlaboise, I can't speak of their service since I haven't used it but the guys in the parts
are great. Always helpful and willing to take the time to find a part no matter how small.

Just went to charlebois to track down bench seat brackets for a T1N. Not in stock, but apparently they can order. We'll see. Never gone there for service, havent needed to, but they will probably be the go to in the future.

In any case, it is a fun place to roll into.
B

While I ended up unexpectedly spending a good chunk of money on my rig, I had a great experience with them.

Bought a 2010 170" in Salt Lake and drove back to VT, had Milton Charlebois do the VT State Inspection.

Found van needed tie-rods along with a couple other minor fixes (tie rods were about $1,000 including labor), and they were great to work with and schedule the service to get everything taken care of. Staff was great both about explaining the repairs and also just answering a number of random shop-talk related questions I had. They also were very helpful in getting a second key for the NCV3 van, which was substantially less expensive than I had expected (around $250 all in).

They estimated the work conservatively as any good shop should, and at the end of the service we came in several hundred bucks less in labor than what they'd originally quoted, which I was very happy with.

Ironically, when the repair was done, the tech handed me the keys to the freshly inspected van (with passing headlights as of an hour prior), and right when I started it up the passenger headlight blew out. They were quick to grab the bulbs from the parts department and get me squared away - we had quite the laugh at the timing of the whole thing!

They have a great shop in Milton, and are expecting to have their smaller vehicle building open sometime this summer to separate the vans from the larger trucks. Also their current building has a small cafeteria that's open during the week if you're waiting on a repair, which is good as there's nothing else really within walking distance.

They also had a 140" 4X4 DIY conversion sitting outside when I went to pick mine up - they seem to do a fair bit of work on conversions both DIY and professional. Their current labor rates are $120/hr and $140 on Motorhomes - they charged me the lesser for my DIY van.

I also spoke to one of their sales reps a few years back about purchasing a 4x4 for my company - both very pleasant and very knowledgable about the vans.

A note to the OP - the address is correct but the Google Map pin is actually their shop across the lake in Plattsburgh, NY which I have not been to.

planetx88 said:
Just went to charlebois to track down bench seat brackets for a T1N. Not in stock, but apparently they can order. We'll see. Never gone there for service, havent needed to, but they will probably be the go to in the future.

In any case, it is a fun place to roll into.
Click to expand...

I stopped in for front brakes. They were two weeks out but had all the parts in stock. The shop rate is $120/hour.
Larry M
2005 PW, 158” WB
You must log in or register to reply here.
Top Bottom