I'm about to replace the bushings and end links on my front stabilizer bar after reading through some threads about the knocking in my steering wheel when going over washboard roads. I noticed the end link bushing is cracked and looks pretty bad.

I searched the forum and couldn't find a detailed write-up on how to replace the end links and bushings. I'm wondering if anyone has any tips/hints to save time. I've always found this forum so useful and been able to take care of 95% of the maintenance thanks to you all.

Lastly, should I replace the bushings/links in the rear sway bar as well. I don't want to create more work for myself, but I'm staying with my in-laws for the next couple of weeks and have access to some great tools courtesy of my father-in-law.

BTW, on the drive across country to my in-laws, I threw a code on my scan guage that was an underboost code. I found the crack in my charger hose. Duct taped the heck out of it to get to Knoxville to buy a new one and got me to Colorado no problem. I've since replaced the other hoses at the intercooler and can't believe the difference in performance of the engine. I'm experiencing fuel mileage I've never had in my 2005 with 94K on it. It jumped from 18.5-19.5 running 70mph to 21.5 running 75mph, and much quieter and cooler. Makes me think there was a crack in the hose for a long time.

Again, thanks for all the advice.
Tommy

the rear ones were a lot easier to replace than the front ones. I did not replace the ends on the front. It did make a huge difference in the handling of the van.
2005 140 cargo
A

Hi Tommy
I'm about to do the same job and was hoping to find some help on this forum, but see that your question still is unanswered.
I assume you have done the job and are willing to give me (and other forum readers) some tips.

Hi there,
This is a good little tip to know, it could save you some time and busted knuckles!

All the best
Steve
www.mercedes.gen.in - The Mercedes-Benz Resource
A

I have a 2004 158" dually, have had for over 130,000 miles and just noticed I don't have a front sway bar, I guess the van didn't have one when I bought it with 100,000 miles. I just noticed that the rear bushings are worn when the rear was lifted and decided to check on the front ones too - it is not there WTF!

I found this old thread whilst looking for advise on replacing front and rear anti-roll bar bushes and links.
Ended up spending 4 hours cussing n swearing and mumbling to myself.
Anyway, replaced the front links last week, not to bad of a job. The old ones prised off with a squirt of wd40 and a lever, top bushes stayed on the bar so cut them off with a stanley knife. Cleaned up the ends of the roll bar and locating pin and applied a smear of red rubber grease. Used a small piece of 2"x1" timber in front of the bottom bush and hammered it on to the locating pin, this gets it 90% on then just use the wood to tap around the edge until fully seated.
The top bush was levered in off the suspension strut using the block of 2"x1" to square it off.
Job done I was quite pleased, then noticed the bushes were shot so checked the rear and they were too. So ordered them all.

Replacing the front bushes was where it turned into a struggle for me having never done it before. On my model there is one nut n bolt holding the bottom of the bush housing and they were corroded and it was a struggle to keep a spanner on the nut (quite a tight little space there) whilst undoing the bolt. The top of the housing slots into the chassis and I managed to wriggle them out with a screw driver and wriggling the bar around.
Cleaned up the housings and bar and applied a smear of the grease. put the new bushings over the bar and pushed the housing over them.
Now try as hard as I can to get the top slot back into the chassis slot and it's not happening. Tried fitting the bush holder first and sliding the bushing in but no joy.
Ended up taking one of the links back off, fitting bushes into holders, slot one furthest from detached link in first, then other.
Then as they're new bushings the housing at the bottom is too far out to get the bolt through.
Used a small clamp to pull it it in but getting the nut onto the bolt was really fiddly.
All done there.

Rear ones were easier. Took the whole bar off. The 13 mm bolts clamping the bush housing together were corroded but a bit of wd40 helped loosen them enough to slide new bushings in.
I removed the end bar bushes using an large socket through which I passed a long bolt and tightened a nut the other end. I cleaned inside the roll bar bush housing with a small grinding tool as both ends were lumpy inside with corrosion. Applied a little grease and used the same method to draw the new ones in. 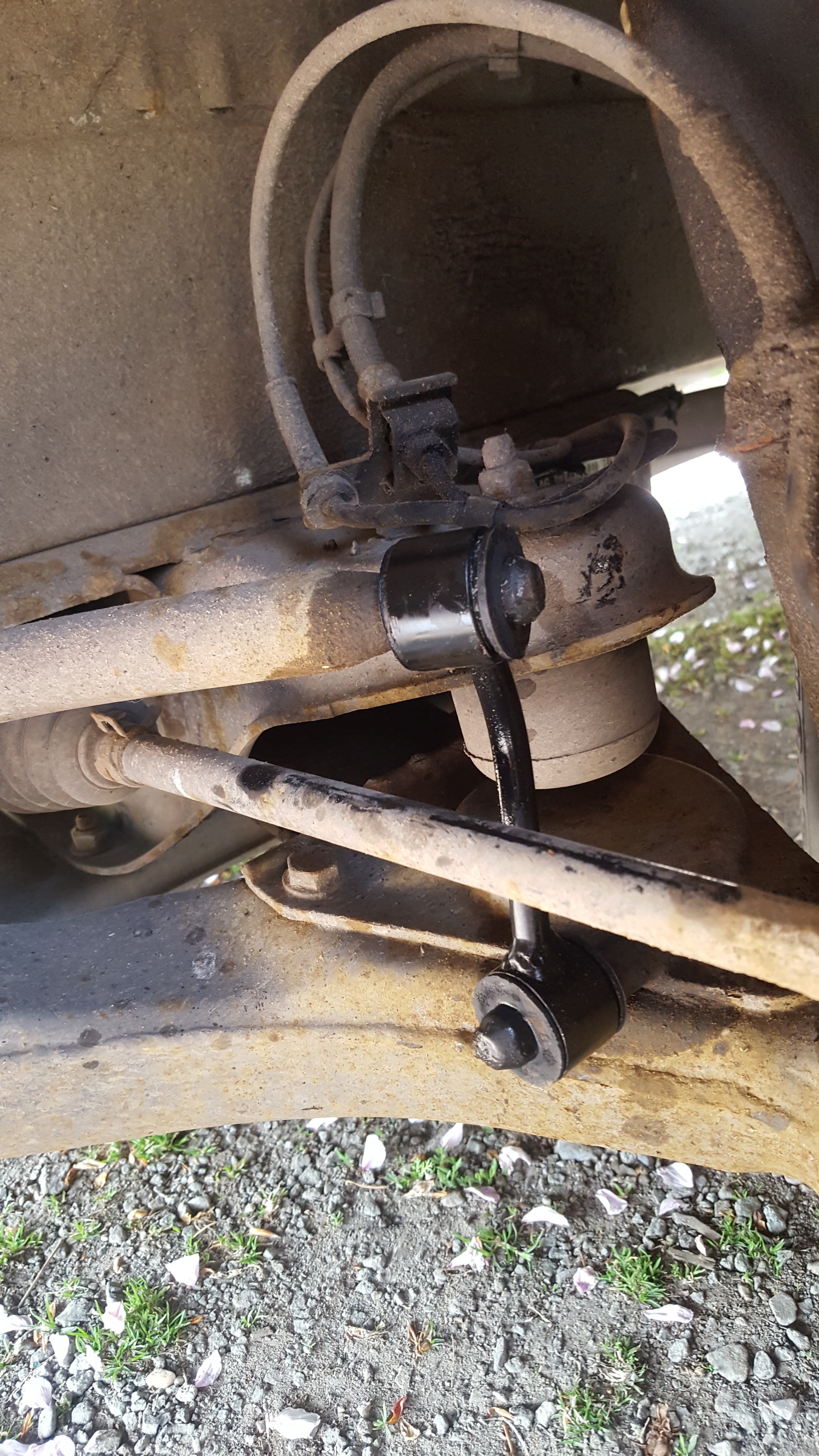 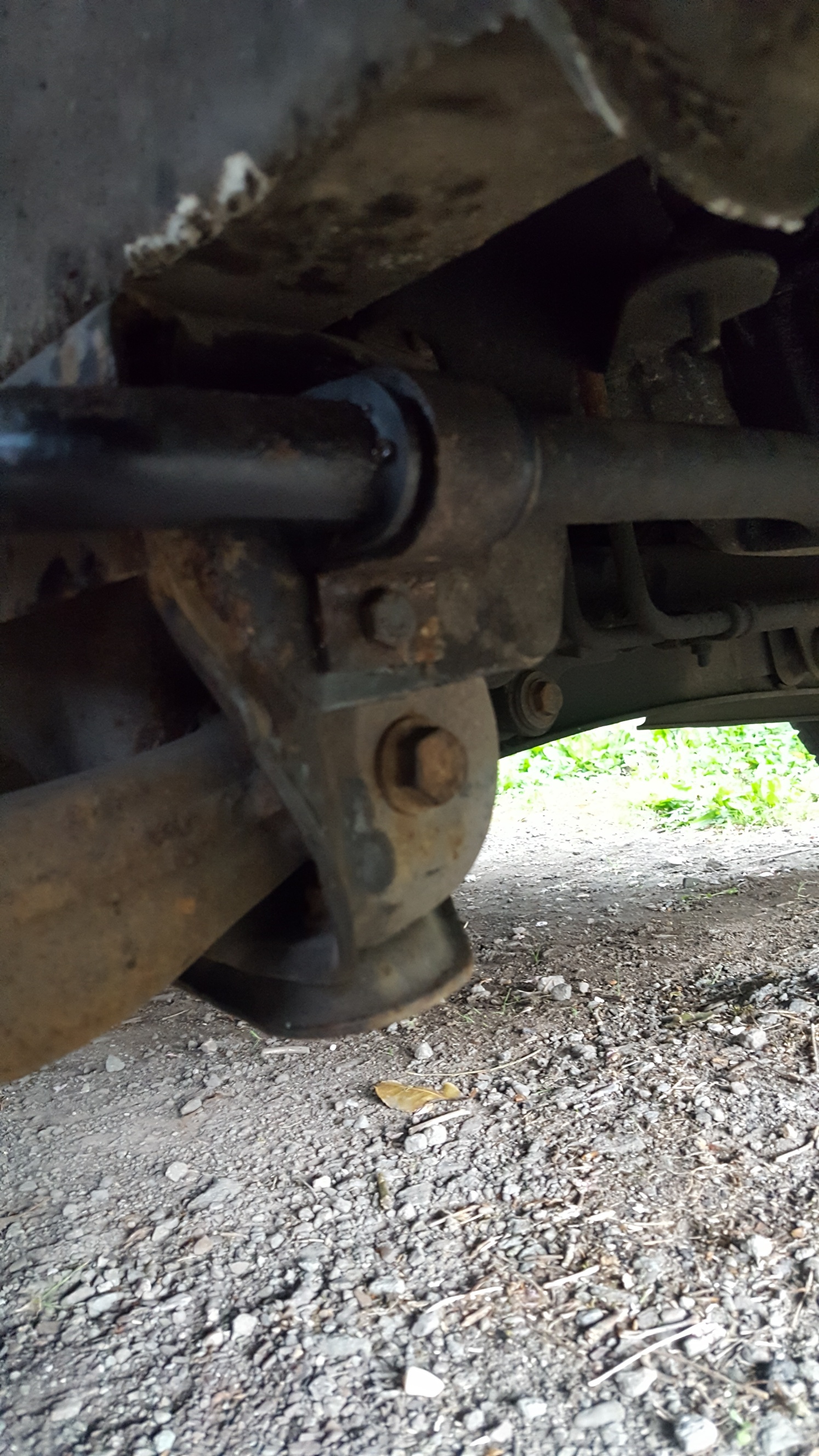 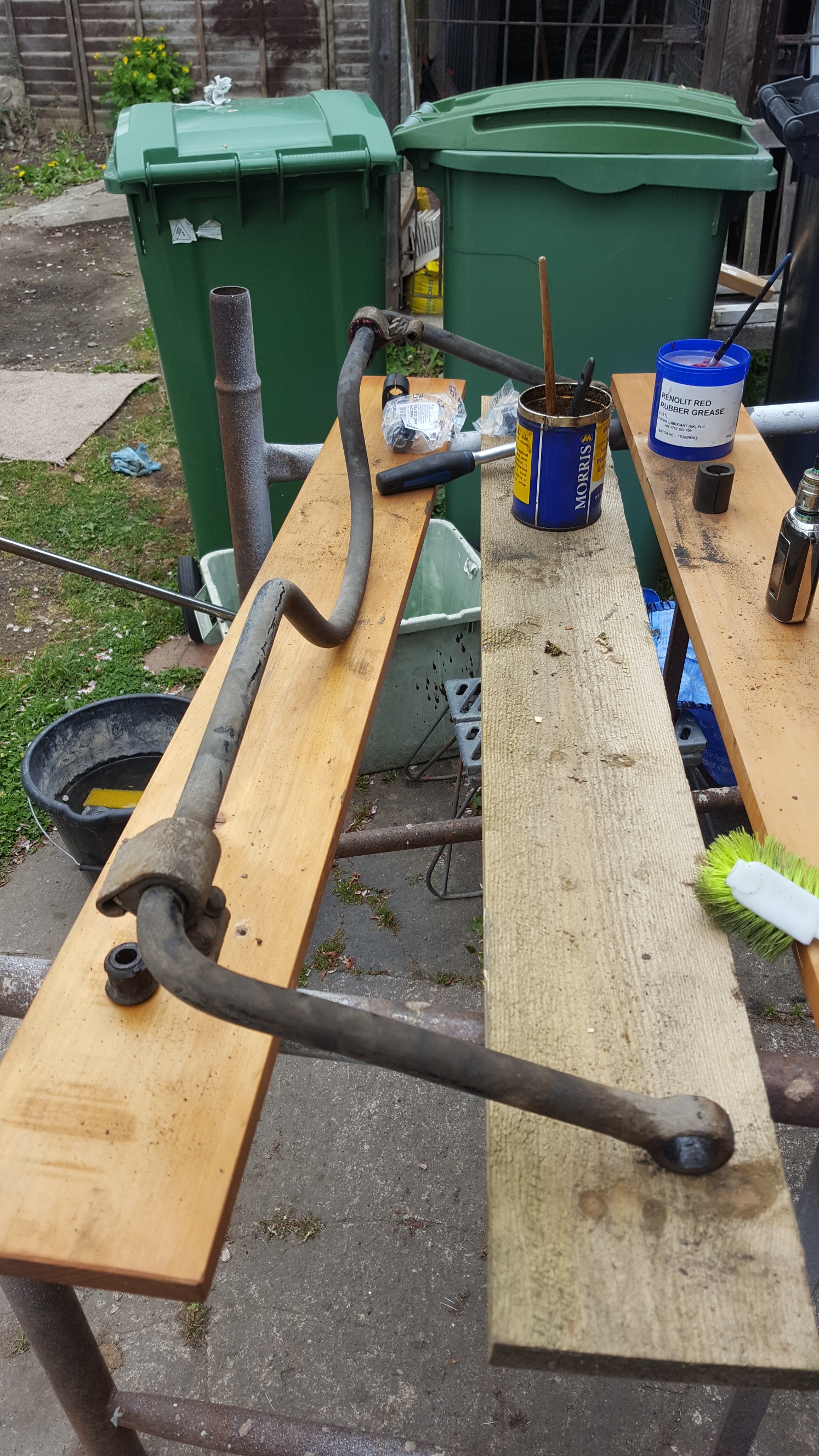 Reviving an old thread, I'm about to go through and do some general maintenance items on the van. Got underneath and took a look at the front and rear stabilizer bushings. At what point do they need to be replaced? I've had vehicles in the past where its so worn that the linkage is loose/moving, which to me warrants replacement. Mine are a bit cracked and worn, but the linkage is all tight. I'm assuming original, so if mileage based that would be 162k.
You must log in or register to reply here.
Top Bottom